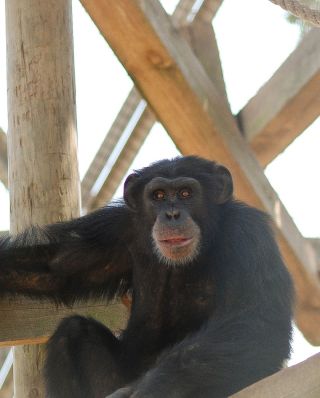 These new findings also add to the research suggesting a vaccine against Ebola for humans is possible, the scientists added.

Chimpanzees and gorillas are severely threatened by recent Ebola outbreaks, which have killed about one-third of the world's gorillas and led the western gorilla to be classified as critically endangered by the World Conservation Union. But Ebola is not the only pathogen the apes face — human respiratory viruses cause half of all deaths among chimps and gorillas that are exposed to humans for research and tourism.

"Diseases have become a huge conservation problem for both gorillas and chimps — both naturally occurring diseases like Ebola virus and diseases humans have exposed them to, particularly respiratory diseases," said study co-author Peter Walsh, a quantitative and field ecologist at the University of Cambridge in England. "A cough could kill a chimpanzee." [Ebola Virus: 5 Things You Should Know]

To help save wild apes from disease, Walsh and his colleagues experimented with vaccines on captive apes. Vaccines against viruses use either a weakened version of the virus or parts of the virus to stimulate the body so it becomes immune to that virus. In the experiments, the scientists used what they called "viruslike particles" — made of clumps of a protein from the coating of the Ebola virus — developed by biotech company Integrated BioTherapeutics in Gaithersburg, Maryland.

Because the vaccine the researchers used is made only of pieces of the virus, it cannot lead to an infection. As expected, the six chimps the scientists vaccinated showed no symptoms of Ebola infection, and displayed none of the changes in blood chemistry or drastic weight loss typical of infection with the virus. "Viruslike particles are extremely safe," Walsh told Live Science. "The vaccine was very unlikely to be dangerous."

For ethical reasons, the researchers did not test vaccinated chimpanzees with live Ebola virus. Instead, they analyzed the effects of antibodies the apes generated after they received the vaccine. When these antibodies were harvested and given to mice infected with Ebola, the survival rates of the rodents climbed from 0 percent to 30 or 60 percent, depending on which of two different vaccine formulations the chimps were given.

These new findings and prior experiments with Ebola vaccines in monkeys suggest an Ebola vaccine for humans is possible, the researchers said. However, due to the cost of developing the vaccine further for humans, and because Ebola is not typically seen in people in developed countries, "even though effective vaccines could be developed for humans, none have been," Walsh said.

The new findings from this first vaccine trial suggest that testing vaccines on captive apes could help save wild ape communities, the researchers said.

"The ape conservation community has long been noninterventionist, taking a 'Garden of Eden' approach to modern medicine for wild animals, but we ended Eden by destroying habitats and spreading disease," Walsh said. "We need to be pragmatic about saving these animals now, before they are wiped out forever, and vaccination could be a turning point."

The U.S. Fish and Wildlife Service is now considering regulations that would end all biomedical testing on captive chimpanzees over the next few years. The United States is the last remaining developed nation that allows such research.

"Scientists could develop vaccines that help protect endangered apes from the diseases they face, such as respiratory viruses; SIV [simian immunodeficiency virus], the grandpa of HIV; and malaria," Walsh said. "But park managers say, and rightly so, that vaccines cannot be used on their chimps in the wild unless they are tested on apes in captivity, so labs with captive chimps are needed for vaccine trials."

Walsh received money for this vaccine trial from Paul Allen, co-founder of Microsoft with Bill Gates. The scientists detailed their findings online Monday (May 26) in the journal Proceedings of the National Academy of Sciences.