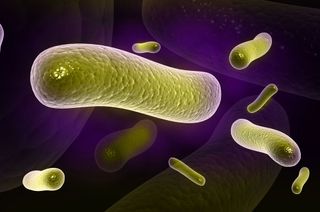 Fecal transplants may carry an "ick" factor, but sometimes they're the only effective way of treating a C. diff infection.
(Image: © mathagraphics | shutterstock)

WASHINGTON — While it might not make good dinner-table conversation, the fecal transplant has become a popular procedure for restoring the natural bacterial balance of the human gut after certain infections.

"Would you get a fecal transplant?" Anna Skeekatz, a postdoctoral researcher at the University of Michigan in Ann Arbor, asked an audience here Sunday (May 18)  in a talk at The Future Is Here, a festival of science and sci-fi produced by Smithsonian Magazine, in conjunction with the organization Nerd Nite. When few people raised their hands, Skeekatz added, "What if it saved your life?"

The idea behind fecal transplants is to restore a healthy collection of microbes living in the gut. The bacterial community living in and on a person is known as the microbiome. Each part of the body — the skin, the lungs, the gut and the genitals — has its own unique microbiome. [5 Ways Your Poop Can Advise You on Health]

This gut microbiome is vital to human health; the bacteria aid in digestion, immune function, drug metabolism and protection against pathogens. As Skeekatz put it, "Microbes are your friends."

But taking antibiotics can disrupt a healthy microbial community, killing off beneficial bugs and leaving a person susceptible to infections. One of the worst invaders is Clostridium difficile, or C. diff., bacteria.

"C. diff. is the leading cause of hospital-acquired diseases," Skeekatz said. It causes more than 250,000 infections per year, which range in severity from diarrhea to a condition called toxic megacolon, which is a widening of the colon that can lead to death, she said.

What makes a C. diff. infection so hard to treat is that the bacteria create spores, a dormant form of the bacteria that lingers on surfaces. This can happen, for example in hospitals, and not even alcohol can kill these spores. People can ingest the spores, but they don't cause an infection unless there has been a change in the person's microbial ecosystem — such as after a course of antibiotics.

Treatment for C. diff infection includes, paradoxically, more antibiotics. But for about 30 percent of infections, antibiotics don't work, and patients get stuck in a cycle of reinfection, Skeekatz said.

When all other treatments fail, that’s where fecal microbiota transplantation comes in.

Fecal transplants involve placing poop from a healthy person into the colon of a person who has a C. diff infection, Skeekatz said.

The transplant specimen usually comes from a donor who lives with the patient and therefore shares the same microbial environment, or from a relative or friend. Even frozen fecal material can be used, recent studies show.

Next, the sample must be processed, usually with a (one-time-use) blender. The processed sample is diluted, and then brought into a clinic, where it can be delivered to the patient via one of three routes: through a tube from the nose to the intestine, during a colonoscopy or via an enema.

Despite the "ick" factor, the procedure has a 90 percent success rate in curing C. diff infections, Skeekatz said. However, some studies suggest the method may not be universally effective.

These transplants are also being investigated as a treatment for other conditions, such as irritable bowel syndrome and Crohn's disease. But the transplants have not been as effective in treating people with those conditions as in treating those with C. diff infections, Skeekatz said.

Scientists are still evaluating the possible risks of fecal transplants, and researchers still don't know exactly why the procedure works.

"It's like a mini-galaxy down there," Skeekatz said, referring to the diversity of microbes in the gut. "We don't know who's important and who's not."