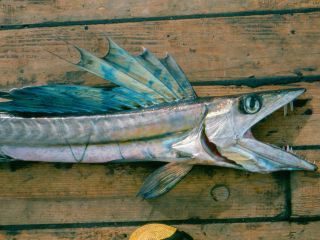 Visitors to Jennette's Pier in Nags Head, North Carolina, were shocked last week when an evil-looking fanged fish washed up alive on the shore.

The monstrous fish has been identified as a long-snouted lancetfish (Alepisaurus ferox), a nocturnal predator that's rarely seen near shore. The fish are known not only by their large fangs and tall dorsal fin, but also by their habit of eating their own species.

Because it's a relatively uncommon fish that inhabits the open ocean, little is known about its life cycle. In adolescence, lancetfish are hermaphrodites (having both male and female sex organs), though there's no evidence of adult hermaphrodites. [See Photos of Lancetfish and other Freaky-Looking Fish]

Lancetfish are also known as handsaw fish, because of their prominent, jagged dorsal fin, which runs almost the entire length of their back. The fish have no scales — their scientific name, Alepisaurus, translates as "scaleless lizard" — and their skin is instead covered with pores.

They can grow to be as long as 6.5 feet (2 meters) in length. Lancetfish generally feed at night, and in addition to dining on other lancetfish, they also eat crustaceans, squid and smaller species of fish.

Lancetfish are in turn preyed upon by seals, sharks and other large fish, including tuna. They're not considered a good fish for human consumption, because their muscles contain large amounts of water, making their flesh somewhat mushy. Fishermen, in fact, consider the lancetfish a "trash" fish that sometimes takes bait intended for more profitable catches such as tuna.

The fact that their muscles have a high water content makes it unlikely that the lancetfish can move quickly or pursue other prey, so scientists speculate the lancetfish is an ambush predator — it probably uses its big dorsal fin to accelerate in short bursts to overcome prey.

The fish are found in open waters throughout tropical and subtropical oceans, though they've been known to travel as far north as Greenland and Iceland.

The lancetfish found in North Carolina was alive when it washed up on shore, but when it was carried back out into deeper water it washed ashore again, indicating it may have been sick, according to Nature World News.