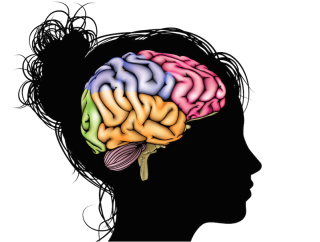 Anorexia nervosa involves an extreme obsession with limiting food intake and weight that can end up taking over a person's life. It is defined as a perceived intense need to drastically limit food intake to produce weight loss.

Anorexia is often thought to affect mostly women. "There is evidence that this is the case, but also conflicting information that boys are equally anorexic but it goes unnoticed and underreported," said Jeanette Raymond, a licensed psychologist. Anorexia affects 0.9 percent of American women, according to the National Association of Anorexia Nervosa and Associated Disorders (ANAD). From 5 to 10 percent of people diagnosed with anorexia are male, according to the University of Pittsburgh.

Anorexia is not really about food, according to the Mayo Clinic. People with anorexia are looking for a way to cope with emotional problems, so they try to find something in their life they can control. Food is something that is a constant in a person's life, so it can be controlled.

As with many mental-health conditions, the exact causes of anorexia are difficult to pinpoint. Scientific research has helped to narrow down the field of likely causes, such as metabolism, psychological issues and genetics.

"Family studies have consistently demonstrated that anorexia nervosa runs in families," Cynthia Bulik wrote in her study, "The Genetics of Anorexia Nervosa," published in 2007 in the journal Annual Review of Nutrition.

If anorexia is caused (or at least heavily influenced) by genetics, people with the disease could be treated using information discovered in their genes, according to Price Foundation Candidate Gene Project.

Clinicians have found patterns in psychological issues with patients who have eating disorders, according to the ANAD. These signs include perfectionism, a need to be liked, a need for attention, a lack of self-esteem and high family expectations.

Factors involving the family that may trigger anorexia, according to Raymond, include the following:

Dr. Walter Kaye of the University of California, San Diego, an eating-disorder researcher, thinks too much blame has been placed on thin fashion models and other media images.

"People have long been blaming families and the media, but eating disorders are biological illnesses, and better treatments will come from more biologically based approaches," Kaye told Scientific American Mind magazine in June 2008.

There are two types of anorexia: the restricting type and the binge-eating/purging type, according to the University of Pittsburgh. The most obvious sign of anorexia is not eating, or restricting the amount of food one eats. People with anorexia may avoid meals or may refuse to eat around other people. They may lie about how much they have eaten, withdraw from family or friends and stay home instead of going to social events. They often become moody, depressed, obsessive about their weight and disinterested in the things they once enjoyed.

There can be other, sneakier ways a person with anorexia can control calorie intake. For example, some will exercise excessively to burn calories, according to the National Institutes of Health. They may cut portions into tiny pieces and move them around on their plate, contemplating every bite. They may go to the bathroom immediately following meals.

Binge eating and purging are behaviors usually associated with bulimia — another eating disorder — but they can also be symptoms of anorexia. Some people with anorexia may eat massive amounts of food in a short amount of time. Afterward, to get rid of the food, the person may purge by using laxatives, diuretics or enemas, or by vomiting, according to the National Association for Anorexia and Associated Disorders (ANAD).

Because food is fuel for the body, restricting food intake can cause drastic changes. Major weight loss is the most noticeable change, but inside, the body deteriorates quite quickly. According to the Mayo Clinic, malnutrition leads to:

While someone with anorexia may say they are trying to look better, the disease will often cause a person's looks to deteriorate. Hair will turn brittle or may even fall out, fingers turn blue, skin becomes dry and a soft layer of hair will grow all over the skin. Fatigue from anorexia can also leave the person pale, with large circles under the eyes.

Not everyone who dies of anorexia dies from starvation. One in five anorexia deaths is by suicide, according to ANAD.

While anorexia and bulimia are both eating disorders, and some symptoms overlap, they are not interchangeable. Anorexia mostly involves not eating, or limiting food intake for long periods of time, resulting in weight loss beyond what is considered healthy (15 percent or more below the normal weight for the person's age and height, according to NIH). On the other hand, people with bulimia tend to maintain a normal body weight but control their food intake in a cycle of binging and purging.

A person can suffer from both disorders at the same time or separately throughout their lives. About 40 percent of bulimia patients often have first had a diagnosis of anorexia, according to the University of Pittsburgh.

Because anorexia can cause so many problems in the body, the first step in recovery is to treat the symptoms. For example, first steps can include getting the person hydrated and on medication that can help with heart arrhythmias caused by the lack of nourishment.

Once the symptoms have been addressed, action will be taken to help the person gain weight while addressing the psychological issues underlying the disease. Therapy, antidepressants or other psychiatric medications and hospitalization are all possible treatments for anorexia.

"The duration and severity of anorexia determines the treatment options," Raymond said. The least-severe cases respond to cognitive behavioral therapy, a type of "talk therapy" that enables patients to develop healthy boundaries and a sense of control outside of refusing food. Group therapy and family therapy are also helpful. Because mother-daughter issues are often a trigger for anorexia, therapy often entails treatment to make it safe for the girl to separate and make relationships outside the family, she said.

Raymond also noted that antidepressants might have only short-term success if underlying psychiatric issues are not addressed. Often, the anorexia will persist and become more severe, Raymond said.

Even after a person is on the road to recovery from an eating disorder, they may relapse. A relapse and a simple slip are two different things, though. "To differentiate between a slip and a relapse, a slip is engaging in a behavior/behaviors, but then getting back on track," said Bonnie Brennan, senior clinical director of adult services at Eating Recovery Center Denver and a certified eating disorder specialist. "A relapse, however, is a pattern of slips that indicates returning to eating behaviors."

Also, it's important to note that people can relapse because they are trying to solve some other kind of problem – such as a medical procedure. For example, if they need to fast before a procedure, Brennan explains. What for some can be an innocent behavior, can be a trigger that can turn into something dangerous.

Signs of a relapse, according to Brennan, can include: