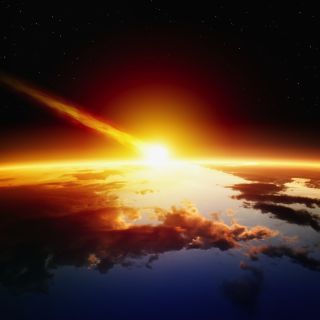 The first-ever fossil proof of dramatic global cooling after the cosmic impact that ended the Age of Dinosaurs has been discovered.

The darkness and cold from the dust and ash thrown up by the giant collision was likely the main driver of the resulting mass die-off, known as the K-T extinction, scientists say. This extinction at the end of the Cretaceous period finished the reign of the dinosaurs. The only dinosaurian survivors were the birds; other reptiles such as turtles and crocodiles survived as well, although these are not descended from dinosaurs.

The prime suspect behind this disaster is a cosmic impact from an asteroid or comet. Scientists have found evidence of this collision near the town of Chicxulub (CHEEK-sheh-loob) in Mexico in the form of a giant crater more than 110 miles (180 kilometers) wide. The explosion that carved out this crater, likely caused by an object about 6 miles (10 km) across, would have released as much energy as 100 trillion tons of TNT, more than a billion times more than the atom bombs that destroyed Hiroshima and Nagasaki combined. [Wipe Out: History's Most Mysterious Mass Extinctions]

"When such an asteroid hits the Earth, the results are devastating," said lead study author Johan Vellekoop, a PhD candidate in paleoclimatology at Utrecht University in the Netherlands. "The impact itself releases an enormous amount of energy, so much that in the first hours after the impact, the air is heated up, igniting global wildfires."

In principle, such impacts also loft dust and soot into the atmosphere, "blocking incoming sunlight," Vellekoop said. "The sun is both our source of light as well as our main source of heat — hence, when sunlight can no longer reach the surface of the Earth, this surface rapidly cools down, creating a so-called 'impact winter,' a period of darkness and cold lasting for decades."

Prior studies hint that the impact winter reduced the amount of sunlight reaching Earth's surface by as much as 80 percent, cooling the land from tropical warmth to below freezing. This darkness and cold would have killed off plants and caused a global collapse of terrestrial and marine food webs.

"Ultimately, more than 50 percent of all plants and animals on Earth died out because of this," Vellekoop said.

However, until now, scientists had lacked fossil evidence of this impact winter, because this severe cold spell might have only lasted months to decades, too short a time period to be captured in a fossil record stretching across millions of years. In addition, many of the algae that produce the chalky fossils scientists use to estimate ancient ocean surface temperatures went extinct during the end-Cretaceous mass extinction.

"Our study is the first to show that this period of darkness and cold indeed took place," Vellekoop told Live Science.

Vellekoop and his colleagues focused their research on rocks exposed along the Brazos River between Waco and Hearne, Texas. These rocks originated from sediments deposited on the floor of a sea that existed in the area during and after the end of the Cretaceous.

The scientists analyzed organic compounds from microbes known as Thaumarchaeota, which adjust the composition of fat molecules in their membranes as sea surface temperatures change.

The researchers investigated organic compounds from Thaumarchaeota in Bravos River sediments of the same age as the Chicxulub impact. These sediments held coarse layers of broken shells — possibly traces of a post-impact tsunami — and anomalously high concentrations of iridium, a metal rare on Earth's surface but more common in space rocks.The findings suggest ocean temperatures fell dramatically after the impact, cooling from about 86 degrees F (30 degrees C) to about 73 degrees F (23 degrees C).

"Working on an event 66 million years ago, it is incredible that we could resolve sea water temperature changes [to] within decades," Vellekoop said.

The most important implication of these findings "is that they demonstrate how devastating large meteorite impacts can be," Vellekoop added. "Our study confirms that such impacts can cause a so-called 'impact winter,' a global darkness lasting for years."

The researchers now aim to verify these results at other sites. The scientists detailed their findings online May 12 in the journal Proceedings of the National Academy of Sciences.