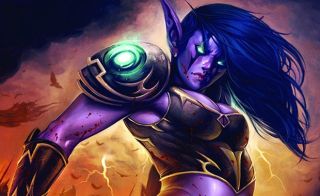 Gamer guys, beware: You may take on a female avatar in online role-playing games, but chances are, you're revealing subtle clues about your true gender.

Boys will be boys online, according to a new study of players of the massive multiplayer online game "World of Warcraft." Men who play using female avatars still display male patterns of movement, the research shows. And they don't act quite as feminine as actual female players during chat conversations, either.

The study suggests that true anonymity is hard to come by, said lead researcher Mia Consalvo, a professor of game studies and design at Concordia University in Montreal.

"You can't leave these things behind," Consalvo told Live Science. "It's not like what we used to think the Internet was — some crazy space where you could totally try different things." [Science Fact or Fantasy? 20 Imaginary Worlds]

Consalvo and her colleagues were interested in studying online gender swapping, because the practice is quite common. A previous study found that 79 percent of players in massive multiplayer online games report having played as another gender at some point, and about 30 percent do so regularly. Interestingly, women almost always play using female avatars, Consalvo said, while men are more likely to swap.

The researchers set up an add-on quest, dubbed "Menace of the Masked Marauders," and invited "World of Warcraft" players to join. They divided the 375 volunteers into groups of three or four , who worked together to complete the quest. The quest was set up to force players to engage in a variety of behaviors, from having chat conversations to waging battles and solving word puzzles.

The participants ranged in age from 18 to 55, and 56 percent were men. Twenty-three percent of the men swapped genders and played with female avatars, while only 7 percent of women played as male avatars.

It's not clear why male players jumped more than female ones, Consalvo said. "It could be attention-getting," she said. "A way to literally stand out in the crowd, sort of the equivalent of waving your arms around."

The players got to decide whether they swapped genders, so researchers also aren't sure how much of the behavioral changes occur because men are trying to alter their behavior when they play with a gender-swapped avatar, or whether the men who decide to swap avatars behave differently no matter what. They did not find differences in these behaviors based on the players' own levels of stereotypically masculine and feminine traits, however.

"We still believe a little bit that we can be different, be anonymous online," Consalvo said. "I think this research shows that we really do bring ourselves into these online spaces. … The traces of who we are, and how we build ourselves up, and how we act and how we talk — we're taking all of those things with us. And part of that is our gender socialization."

The researchers report their findings online in January in the journal Information, Communication & Society.