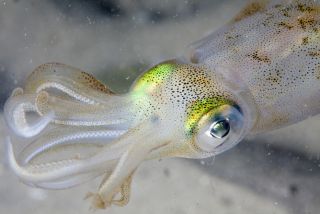 What doesn't kill you makes you stronger: Squid become more vigilant when they feel pain, which helps them survive.
(Image: © pacificklaus, CC BY-NC)

Lasting feelings of pain or anxiety after an injury may seem perplexing, but they serve an evolutionary purpose, research suggests.

Squid that behave more vigilantly after even a minor injury are more likely to survive than their more brazen counterparts, a new study reveals. The findings suggest that persistent pain may be more useful than once thought, according to the study published today (May 8) in the journal Current Biology.

This study provides the first direct evidence to suggest that animals developed heightened sensitivity— which promotes pain in some animals — in response to natural selection, particularly to avoid predators, said study researcher Edgar Walters, a biologist at the University of Texas Medical School at Houston. [5 Surprising Facts About Pain]

No pain, no gain

To study the evolution of lasting pain, Walters and his team studied how squid interact with their predators, black sea bass.

When squid feel threatened, they perform a step-by-step series of defensive behaviors, even if the predator is far away, the researchers said. The scientists observed squid and black sea bass swimming in laboratory tanks, and compared how healthy and injured squid responded to different levels of perceived danger.

The squid could still get around with an injury to one of their arms, but this put them at a disadvantage because the bass would preferentially hunt the injured animals, and from further distances, too. When bass were hunting injured squid, the prey became more vigilant, acting more defensively than their uninjured slimy brethren.

Next, the researchers treated squid with an anesthetic that prevented them from feeling pain when injured, and the animals failed to display defensive behavior that would have kept them alive.

The sensation of pain that made the squid hyper-vigilant could be analogous to the same feelings in humans, the researchers said — although the squid may feel something completely different from human pain. Still, the squids' response to injury offers a new perspective for understanding human responses to pain.

If scientists can understand more about the natural purpose of pain sensitivity, they might be able to find ways to treat pathological pain in humans, the researchers said.