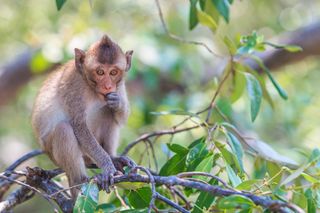 In the annals of war, animals have answered the call of duty more than once.

There were the Mongolian horses that carried Genghis Khan and his invaders into battle, the elephants that took Hannibal's troops across the Alps and into Italy, and the dogs of war that have served faithfully as attack dogs, scouts, trackers and sentries.

Enter a new animal helper: the macaque monkey, which is now serving the People's Liberation Army of China by protecting an air base from birds, according to the Washington Post. [The Top 10 Animal Recruits in War]

The air base has been beleaguered by flocks of birds, which can get sucked into engines and cause aircraft to crash. (A bird strike was blamed for the 2009 crash of a passenger plane into the Hudson River near Manhattan, as well as countless other airplane mishaps over the years.)

The monkeys have been trained by military personnel to climb trees on the base and destroy the bird nests built there. Numerous other strategies — such as scarecrows, firecrackers and nets — have failed, as the roosting birds simply returned to the trees days later.

The monkeys are earning their rations, according to the Chinese military news site Blue Sky News. Upon command, the primates scamper up trees and dismantle the birds' nests. Thus far, the macaques have destroyed more than 180 nests — and the birds have yet to return.