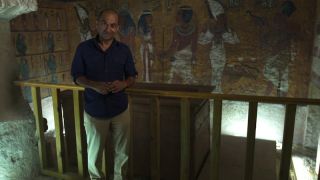 King Tutankhamun's tomb in Egypt went undisturbed for 3,000 years. But in the 90 years since its discovery, the ancient burial chamber has been ravaged by tourism.

To prevent further damage and deterioration, conservationists hope a newly unveiled, life-size replica of the tomb will ease the flow of traffic to the original. To coincide with the public opening, BBC World News is set to air a 30-minute documentary on the mock tomb this weekend, titled "A New Tomb for Tutankhamun: A Travel Show Special," hosted by broadcaster Rajan Datar.

Often referred to as the "boy king," Tut lived between roughly 1343 and 1323 B.C., during a period known as Egypt's New Kingdom. When he died at 19, Tut was buried in the Valley of the Kings, a sprawling necropolis for pharaohs, along the Nile opposite Luxor. The tomb was lost to history until 1922, when British archaeologist Howard Carter first opened it, finding the linen-wrapped mummy of Tutankhamun in a grand sarcophagus. [Photos: The Life and Death of King Tut]

The discovery was sensational. Tutankhamun became the world's most famous pharaoh. But the influx of tourists who flocked to his tomb took its toll. Because of constant changes in humidity, as well as the breath and body oils of people, the walls are crumbling.

The prospect of sealing Tut's tomb to the public has been thought to be "commercial suicide for Luxor," Datar says in the documentary. But in an attempt to mitigate the damage from tourism, conservationists began making a replica in 2009. They painstakingly laser-scanned each tiny speck of sand and paint crack inside the tomb and used technology like 3D printing to make facsimile as close to the original as possible.

Political upheaval in Egypt stalled initial plans to install the replica in 2011. In December 2013, the components of the mock tomb were finally pulled out of storage in a basement in Cairo and moved to Luxor. It officially opened on Wednesday (April 30).

On camera, tourists as well as guides and locals expressed doubt that many people would come all the way to the Valley of the Kings and choose to see the facsimile over the real thing. The replica's creators, however, are adamant that a facsimile is, for now, the most sustainable way for visitors to enjoy the tomb, since there is no restoration technology that can undo the damage to the original.

"People want to puts screens of glass. People want to put in air conditioning systems," Adam Lowe, a technical artist with the Factum Foundation, said in the documentary. "But the tomb was never meant to be visited … the simple truth is the tombs can't take that number of visitors."

The Factum Foundation created the replica with the Society of the Friends of the Royal Tombs in Egypt and the Egyptian Tourism and Antiquities ministries.