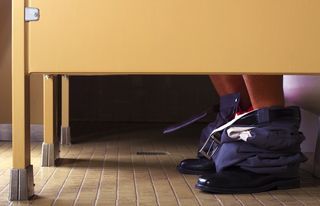 The bowel movement: a host of apps have been developed for tracking your poop.
(Image: © Rommel Canlas | Shutterstock)

Sometimes it seems like there's a smartphone app for almost everything, and a ton of them let you track data about yourself. There are apps for tracking your daily calories burned, steps taken and stairs climbed — and now there is a wealth of apps that let you track your bowel movements.

Whether they're used for health reasons, curiosity or merely to tickle your sense of humor, there are poop-tracking apps for every need. Here is a look at a few of them.

The free Android app PoopLog lets you record your bowel movements using the Bristol Stool Scale, which classifies feces into seven categories based on shape and texture. You can also record the volume and time of the bowel movement, and even attach a photo or note with your entry to share using the social media platform of your choice. [The Poop on Pooping: 5 Misconceptions Explained]

The app's creator writes in the description of the app on Google Play, "I was out of work, and on disability for 7+ months due to severe bowel problems. I'm a geek, so I started tracking everything, even my bowel movements."

In addition, this app can tell you whether you're constipated and haven't had a bowel movement for a while.

But turd tracking isn't just for Android users. Bowel Mover Pro is an iOS poop tracker for iPhone or iPad. This app lets you track not only the number and texture ("soft" or "normal") of your bowel movements, but also your stress level, how many cups of water you've had and whether your meals were gluten-free.

"In the end, the BM Pro presents you with a graph of this information, allowing you to analyze your poops like a day trader studies the NASDAQ," journalist A.J. Jacobs wrote in his column "Jump Start" on Upwave.com.

Just what it sounds like, Places I've Pooped is an app that lets you keep track of places where you've gone "number two." It's like a twisted version of checking in at your favorite hangout. But you might want to be careful of where you are when you whip out your shiny Apple device to post an update.

Designed for iPhone and iPad, the app is free, or $2.99 for an ad-free version.

Poop is not always a laughing matter — bowel problems can signal deadly diseases. The makers of a new smartphone app called PoopMD say their program can detect signs of a severe liver disease that affects newborn babies. The disease, called biliary atresia, is marked by white or clay-colored poop, an abnormality most parents aren't warned to watch out for, the researchers say.

Using the free app, developed by HCB Health for Johns Hopkins University, parents can snap photos of their baby's diaper contents, and color-recognition software sends them feedback within seconds. Parents can then decide whether to send the photos to their child's pediatrician.

So whatever your reason for needing a poop app, rest assured that the market is flush with choices.