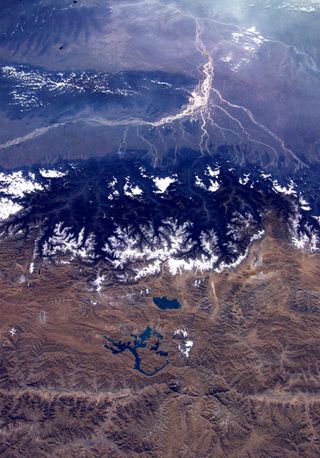 The Himalayas, white peaks in the center of this image divide the Tibetan plateau, to the bottom of this image, and Bangladesh, at the top of the image snapped by ESA astronaut Andre Kuipers.
(Image: © ESA/NASA)

The southeastern edge of the Tibetan Plateau — a massive geological feature that stretches across about 1 million square miles (3 million square kilometers) in central Asia — rose up to near-modern heights millions of years earlier than previously thought, new research suggests.

If correct, this discovery extends the early Tibetan Plateau more than 620 miles (1,000 km) farther east than previously thought. The finding also offers new insight into the forces behind the elevation of this piece of the world's largest and highest plateau.

Previous research has suggested the southeast margin of the plateau, located in China, rose up about 15 million years ago. But chemical clues in rock samples from sites in China's Yunnan and Sichuan provinces suggest this area reached modern elevations of 1.2 to 1.9 miles (2 to 3 kilometers) above sea level during the Eocene epoch, about 40 million years ago. [High & Dry: Images of the Himalayas and the Tibetan Plateau]

"The idea was to track the moving front of uplift," said lead researcher Gregory Hoke, an earth scientist at Syracuse University. "What we found instead is that margin of the plateau has been high for a long time."

The Tibetan Plateau's story began about 50 million years ago, with the collision of the Indian subcontinent and Eurasia. This collision caused the Earth's crust over Tibet to thicken, and many geologists think this thickening eventually led to the rise of the southeastern margin, through a phenomenon known as low crustal flow. According to this theory, over time, the thickening caused the rock in the lower parts of theEarth's crust, well below the surface, to heat up and become weak and ductile, and eventually ooze out toward the southeast, causing the elevation to increase, Hoke told Live Science.

Hoke and his colleagues examined rock samples for evidence of ancient elevation change in the form of ratios of heavy-to-light forms of oxygen. The ratio of heavy-to-light oxygen molecules in rainwater shifts with elevation because more of the heavy molecules are lost when clouds travel over high-elevation features. This rainwater becomes soil water, preserving this ratio in soil, which is often buried and turned into rock. Hoke and his colleagues used the oxygen ratios they found in the rocks to infer the elevation of the sample sites at the time the rocks were formed. This led them to the conclusion that this part of the plateau reached near-modern elevations tens of millions of years earlier than thought.

Because the conditions necessary for low crustal flow take a long time to form, "our data showing an early high plateau implies low crustal flow was not as important as previously envisioned," Hoke said.

Leigh Royden, a geologist at the Massachusetts Institute of Technology, was among those who had hypothesized a prominent role for low crustal flow in raising the elevation of much of the eastern part of the plateau, including the area on which Hoke focused.

Royden welcomed the new results, but disagreed with Hoke's take on the implications of the timing. Low crustal flow, Royden said, likely played an important role in raising this part of the plateau to near-modern elevations.

"I don't think you have to throw the baby out with the bath water," she said.

The role of low crustal flow?

Royden sees evidence of two episodes of low crustal flow, the first of which occurred much earlier than previously thought, thus pushing the area from which most of Hoke's samples came from to near-modern elevations during the Eocene epoch. Then, about 10 million to 15 million years ago, the heated rock broke through a geological barrier acting as a dam to the south, causing more elevation change in this direction. (The exact nature of the barrier remains unclear, she said.)

This interpretation fits with some of Hoke's data. While most of the samples in the new study show elevations reaching near-modern levels during the Eocene, the two southernmost sites do indicate an increase in elevation that occurred millions of years later.

"It gives us a more detailed — and, in many ways, more satisfying — picture of how the plateau edge has evolved," Royden said of the study results.

This research was funded by the National Science Foundation and was published online April 9 in the journal Earth and Planetary Science Letters.