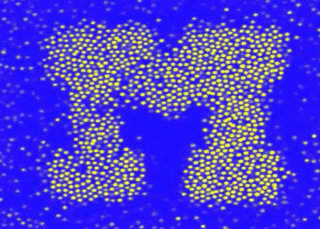 Just as a chameleon can instantly morph its skin color to match its surroundings, a new method of controlling crystals using light and chemistry could make clothing or cars change color on demand.

The method involves shining a laser on tiny latex particles to make them assume a 3D crystalline shape or pattern, such as a letter M. When the laser is switched on or off, the crystals appear or disappear.

Unlike for chameleons or octopuses, creating man-made materials that change color on demand is really difficult, said Mike Solomon, a chemical engineer at the University of Michigan in Ann Arbor and senior researcher of a study detailed in a forthcoming issue of the journal Nature Communications. [Biomimicry: 7 Clever Technologies Inspired by Nature]

"Wouldn't it be neat if you could change some attribute — such as a display, part of car, or clothing — on demand?" Solomon told Live Science. Solomon and his graduate student, Youngri Kim, sought to develop technology that could ultimately do just that.

Traditionally, researchers have sought to create camouflaged materials by applying electric or magnetic fields to particles. But these methods are cumbersome and expensive, Solomon said.

By contrast, Kim and her team found a way to achieve shape- and color-changing effects using latex paint microparticles — tiny particles about 0.001 millimeters (4/100,000th inch) in diameter — in a kerosene-like fluid, by shining a laser on them. By manipulating these "camouflage crystals," the researchers were able to construct a letter "M," for the University of Michigan. They have also experimented with making optical lenses.

"We can shine the light in a certain region, and the particles create a crystalline region where they all come together and create this crystal structure," Kim said in a statement.

The researchers found that shining light on the microparticles made them react chemically with a layer of indium tin oxide on the bottom of the pool of fluid. The reaction produces an electric current in the fluid, which causes the particles to rearrange themselves.

The new method of making materials change their shape or color has many exciting applications. For instance, it could be integrated into clothing or automobile paint, for camouflage purposes, or just for aesthetic reasons.

A significant challenge will be adapting a fluid-based material for use in fabrics or vehicle paints (which ultimately dry). Another question is how much light is needed for the particle method to work. Right now, the technique relies on lasers, but those would be impractical for many applications. Future studies will need to address these issues, Solomon said.