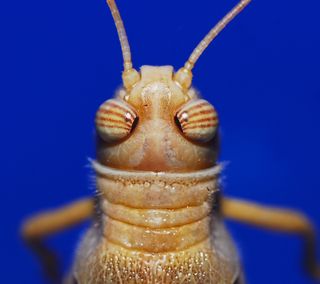 A controversial, high-contrast camouflage that once decorated the hulls of World War I battleships really exists in nature — though whether humans are fooled remains an open question.

"Motion dazzle" camouflage uses bold geometric patterns in an attempt not to blend in, but to confuse observers. Theoretically, these patterns make it difficult to judge speed and trajectory. Zebras' stripes may be an example of this camouflage, though that's never been proven — their bold black-and-white stripes also repel flies, which may be their main function. Motion dazzle camouflage isn't about blending in, as blend-in camouflage stops working as soon as an animal moves. A similar type of camouflage is disruptive or edge camouflage, which similarly uses bold patterns to confuse the eye even when an animal is in motion.

During World War I, the British and United States Navies adopted dazzle camouflage on their warships, resulting in "razzle-dazzle" vessels that looked like the brainchildren of Picasso. Despite the widespread use, nobody knew for sure whether razzle-dazzle camouflage worked, and computer-based studies on humans have yielded mixed results. [Optical Illusions: A Gallery of Visual Tricks]

"The actual evidence that the phenomenon really exists has been a bit sketchy," said Roger Santer, a zoologist at Aberystwyth University in the United Kingdom.

To figure out whether dazzle camouflage really exists, Santer turned to an organism he knows well: the locust, which is equipped with specialized vision neurons that respond to looming objects. Looming is an important motion to detect if you're a locust, as it could indicate that a predator is headed your way, ready to devour you whole. When a loom-detecting neuron fires, it triggers flying locusts to leap or to swerve out of the way.

Dazzle camouflage should mask motion, so if the camouflage really works, it should keep this neuron from working at its best, Santer reasoned.

To test the idea, they parked locusts in front of specialized computer screens, monitoring their visual neurons with copper wires inserted into their heads. On the screen, locusts would see a series of squares, expanding rapidly so as to look like they were looming toward the insects. Santer varied the contrast of the squares against the background. In some trials, he split the squares into top and bottom halves, which he also varied in contrast.

The results showed something counterintuitive. The locusts' neurons responded more weakly to squares with a light bottom half and a dark top half than they did to a black square alone. Adding a light half to a square might seem easier to detect, but apparently not for the locusts. [Vision Quiz: What Can Animals See?]

The reason seems to be a quirk in the locust's visual system, Santer said. When a dark stimulus expands, it sends a "lights off" signal to the visual system, as a dark object replaces the bright background. The result is that the locust senses something coming and gets out of the way.

But when a light stimulus is tacked onto that dark stimulus, the visual system gets two conflicting messages. The expanding dark says "incoming!" but the expanding lightness seems to indicate something retreating.

"It causes these two opposite stimuli on the eye that antagonize one another," Santer told LiveScience.

The confusing, oppositional signals cause the visual neuron to respond more weakly than it otherwise would. The neural activity peaks later and at a lower rate in response to the motion dazzle (the patterned squares), Santer said. This activity correlates with the locust behavior, so it has real-world effects.

Lots of animals, including mammals, birds and fish, have looming-detection neurons, Santer said, but whether motion dazzle would fool them too is still unknown. The studies on human perception of motion dazzle all focused on sideways motion, not an object coming toward the viewer, he said.

Nevertheless, the study is the first to demonstrate conclusively that motion dazzle works, Santer said. The next step would be to find out if predators have evolved to wear these patterns specifically to fool their prey, and if motion dazzle camouflage really benefits organisms in the real world, he said.

"Insects are really interesting and important models to investigate this with," Santer said. "If we're going to be looking at motion dazzle from the point of view of theoretical predators catching prey, they're massively abundant, so they're important animals for investigating the motion dazzle effect."