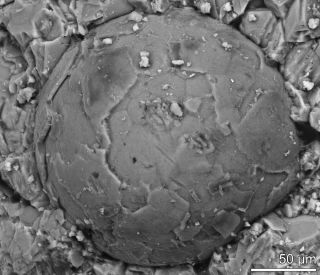 A Cambrian embryo fossil exposed by acid etching on rock. The polygonal pattern suggests that the embryo was in the multicellular blastula stage of development.
(Image: © Broce et al)

Tiny, spherical fossils found in southern China appear to be the embryos of a previously unknown animal.

The fossils come from the Cambrian, a period dating from 540 million to 485 million years ago and known for an explosion of diversity. Some of the organisms that appeared during the Cambrian, such as the bug-like trilobite, had exoskeletons and other hard parts that fossilized nicely. Others, including sponges and worms, were made of soft tissue that rarely preserves.

Researchers Jesse Broce of Virginia Tech, James Schiffbauer of the University of Missouri and their colleagues were searching for these rare soft-tissue fossils in limestone from the Hubei province of southern China when they found something even more rare: tiny spheres, including some with polygonal patterns on their surfaces. These itsy-bitsy fossils are most likely fossilized embryos, the researchers report in the March issue of the Journal of Paleontology. The fossils come from the third stage of the Cambrian, dating back to around 521 million to 541 million years ago. [See Images of a Giant Cambrian Creature]

"We found over 140 spherically shaped fossils, some of which include features that are reminiscent of division-stage embryos, essentially frozen in time," Schiffbauer said in a statement.

The researchers began their investigation by attempting to dissolve fossils out of the limestone from China's Shuijingtuo formation with acid, but that method seriously damaged or destroyed the spherical fossils. Researchers then hand-chiseled the rock into millimeter- or centimeter-sized chunks, exposing the fossil surfaces manually.

From there, the researchers investigated the spheres with a variety of techniques, including slicing them into thin sections, which can be viewed under a microscope. The scientists also imaged the fossils with X-ray and scanning electron microscopy and X-ray techniques.

The results showed specimens with a phosphate-rich envelope surrounding a ball of calcite. (The organic compounds that once made up the embryos have long since mineralized.) Some of the spheres had polygonal patterns that look very similar to those seen on fossilized embryos from Markuelia, a Cambrian worm-like creature. The researchers believe that these specimens are blastulas, which are an early, multicellular stage of embryonic development.

It remains a mystery what these embryos would have grown up to become. Fossilized embryos from a variety of species pop up occasionally in the fossil record, from a 380-million-year old fish with an embryo still in her belly to dinosaur embryos still curled up inside their eggs.