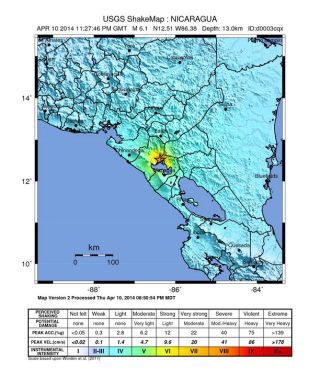 An earthquake of magnitude 6.1 shook Nicaragua Thursday (April 10), according to the U.S. Geological Survey (USGS).

More than 250 people were injured during the earthquake and one woman died of a heart attack, according to SINAPRED, the country's national disaster management agency. More than 1,000 houses were damaged and landslides blocked a highway near Managua, an agency spokesperson said at a press conference. President Daniel Ortega decreed a yellow alert and cancelled school in the provinces of León and Managua because of the risk of further damage from aftershocks, according to news reports.

A magnitude-6.2 earthquake beneath Managua destroyed much of the capital city in 1972, displacing two-thirds of the city's 325,000 residents and killing as many as 7,000 people, according to the USGS.

The damage caused by any single event depends on the quake's depth, proximity to populated areas, building standards in the region, as well as the type of earthquake. The USGS frequently updates the magnitude of an event after more data is analyzed.