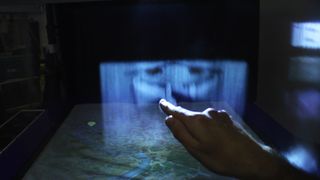 Like a hologram from "Star Wars," a 3D picture projected onto a curtain of fog could be the computer screen of the future.

The so-called "MisTable" screen allows users to push images and objects on the "screen" around with their hands. The device could change the way people collaborate, researchers say.

A team of computer scientists will unveil the fog screen at a conference on human-computer interfaces, held April 26 to May 1. [See Video of Fog Screen in Action]

"MisTable broadens the potential of conventional tables in many novel and unique ways," Sriram Subramanian, an expert in human-computer interaction at the University of Bristol in England who helped to create the screen, said in a statement.

The display consists of a tabletop with a fog machine, with a reservoir and distribution chamber underneath, and projectors and fog screens on top. The fog machine produces a fine mist upon which 3D images are projected. With a swipe of the hand, users can push content between the screen and the tabletop.

Users can see through the screen and reach through it to interact with the tabletop or space above. The screen can display things in 2D or 3D, and allows users to share their content with others.

"Users can be aware of each other's actions and can easily switch between interacting with the personal screen, to the tabletop surface or the interaction section," Subramanian said. "This allows users to break in or out of shared tasks and switch between individual and group work."

Despite its cool factor, the display definitely seems a little clunky at the moment. But right now, it may be Princess Leia's only hope.