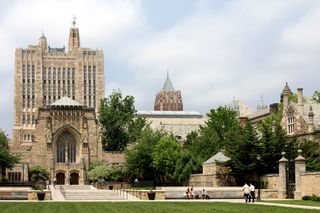 Yale University health officials determined that a student was too thin and needed to gain weight or risk suspension.
(Image: © Pete Spiro / Shutterstock.com)

Both of Frances Chan's parents were thin, as were her grandparents, so it was no surprise to her when she, too, grew up with a slender physique.

But the 5-foot-2 inch (158 centimeters) history student at Yale University, who weighs 92 lbs (41 kilograms), was told by school officials that she must either bulk up or ship out. Her lithe figure and relatively low weight were interpreted as a sign that she might have an eating disorder or another health problem.

Chan's struggle to pack on the pounds, and Yale's insistence on using body-mass index, or BMI, as a yardstick to measure "appropriate" weight, has drawn renewed criticism of BMI as a gauge of an individual's health. [8 Reasons Our Waistlines Are Expanding]

"I ate ice cream twice a day. I ate cookies. I used elevators instead of walking up stairs," Chan told the New Haven Register. "But I don’t really gain any weight."

Chan, 20, was forced to endure mandatory weigh-ins; she also met regularly with a mental health counselor and a nutritionist. At one point, a nurse told Chan that her low weight might kill her.

But all her best efforts resulted in a weight gain of just 2 pounds (1 kg). "It felt really bad to be this powerless," she told the Register.

People with BMIs higher than 30 are at an increased risk of dying from heart disease, diabetes, cancer and other diseases, many studies have shown.

But BMI has recently come under attack as a flawed way of determining an individual's health or their appropriate weight.

For one thing, BMI doesn't indicate where fat is distributed on the body. Belly fat (fat around the abdominal organs) increases the risk of diabetes, heart disease and death, whereas peripheral fat (fat beneath the skin elsewhere in the body) may be more innocuous, studies suggest.

BMI also fails to account for differences in race, gender and age, and it's not accurate for athletes (who weigh more because of muscle) or for older people who have lost height.

Despite these limitations, BMI is still a widely used measure of health, according to Dr. Rexford Ahima, a medical professor at the University of Pennsylvania. "Most studies depend on BMI, and we know it's not a very accurate measure," Ahima told Live Science in an earlier interview.

But why is a flawed measurement so often used? "Because it's simple," Ahima said, adding that it's easy to weigh people and measure their height.

After several months of weigh-ins and other interventions, Chan was fed up, and decided to take her lament public with an essay in the Huffington Post. She soon began hearing from others who had been through similar ordeals.

"It's something we need to bring attention to," Chan said. "I don’t want to get kicked out of school, but no one, so far, has been willing to stand up for me."

Finally, after Chan’s family sent Yale her childhood medical records and had a family doctor contact the university, school officials softened their hardline stance against low-BMI students. A new Yale doctor assured Chan that the school had made a mistake, and she now checks in at the university health center just once a semester.

"At Yale, you’re taught to be the change that you want to see in the world," Chan said. "Well, this seems like an easy thing to change."