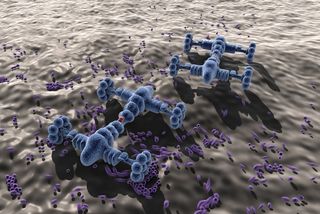 Researchers have created nanobots — on the order of nanometers, or one-billionth of a meter — that have the ability to follow specific instructions, making them programmable. (Shown here, a conceptual image of nanotechnology.)
(Image: © imredesiuk | Shutterstock)

At the Institute of Nanotechnology and Advanced Materials at Israel's Bar-Ilan University, Ido Bachelet led a team of scientists in building tiny robots that can respond to chemical cues and operate inside a living animal. More than that, they can operate as logic gates, essentially acting as real computers.

That gives the nanobots — on the order of nanometers, or one-billionth of a meter — the ability to follow specific instructions, making them programmable. Such tiny robots could do everything from target tumors to repair tissue damage.

The experimenters used a technique called "DNA origami" to make the robots. DNA comes in a double-helix shape, making long strings. And like yarn, the strings can be linked together to make different shapes. In this case, the researchers knitted together DNA into a kind of folded box with a lid, a robot called an "E" for "effector." The "lid" opened when certain molecules bumped into it. [Code of Life: Photos of DNA Structures]

The robots were injected into a Blaberus discoidalis cockroach, a species commonly used as pet food for reptiles. Inside each "box" was another chemical, which recognized the hemolymph cells, which are the cockroach's version of white blood cells. The chemical in the box would bind to the blood cells.

The different robots carried "keys" to open up the "E" robots in the presence of one or more chemical cues. So, for example, one test was on E robots that opened up only if both cues (call them X and Y) were present. Adding the P1 robots to the mix lets the E's open up in response to X only, while adding the P2 robots lets the E robots open in response to Y only.

Meanwhile, the "N" robots stop the E bots from opening up, so they function like the "NOT" gates in a computer.

In combination, all of these robots can then do logical operations, such as counting the number of times a given chemical hits the robot carrying the payload being delivered.

"It allows you to look for more than an AND operation," said Shawn Douglas, an assistant professor at the University of California, San Francisco, who worked with Bachelet on similar projects in 2012 at Harvard's Wyss Institute. Douglas was not involved in the current research.

In addition, the research is the first time someone has demonstrated this particular type of logic system in living animals, he said, which is a first step toward trying it out on other species.

There are still a few questions that need to be answered, such as how many nanomachines are needed in a given space, Douglas said. A lot of work in other animals is also needed before these nanobots get to the clinic.

The study is detailed in the April 6 issue of Nature Nanotechnology.