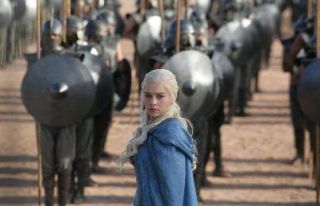 Daenerys Targaryen, a major character on HBO's "Game of Thrones," comes from a family that regularly engaged in incest.
(Image: © HBO (via Facebook as Game of Thrones))

Millions of fans of the HBO series "Game of Thrones" are girding themselves for the April 6 premiere of the wildly popular show's fourth season.

But the show's never-ending action might distract fans from the real science that underpins some of the series' pivotal events and characters. [Top 10 Beasts and Dragons: How Reality Made Myth]

Milk of the poppy

In a land where warfare, violence and all-around mayhem are the norm, it's only a matter of time before someone gets hurt. And when that happens in "Game of Thrones," there's usually someone on hand to offer them milk of the poppy, a painkiller that can, in high doses, lead to unconsciousness.

Morphine, too, is derived from poppy plants, and is used to make heroin, another powerful narcotic. Morphine was first extracted from opium resin in 1803; it quickly gained popularity among doctors as a painkiller, and was used widely in the U.S. Civil War and other conflicts.

Though morphine has largely been replaced by other drugs today, poppies are still an important source of the class of painkillers known as opiates.

The large, ferocious canine on "Game of Thrones" known as a dire wolf is not just the symbol of the show's noble Stark family — the Stark children also adopted a litter of six dire wolf pups that were orphaned in the woods near the Stark's ancestral home, Winterfell.

Dire wolves, however, did not just spring from the imagination of author Martin: Dire wolves are known to have existed on Earth until about 10,000 years ago.

Slightly larger and with a more robust build than modern wolves, the dire wolf (Canis dirus) also had larger teeth and a more powerful bite that could easily crush the bones of its prey. The species was common throughout North and South America; dozens of dire wolf fossils have been retrieved from the La Brea Tar Pits in Los Angeles.

As the Stark family is wont to say, "winter is coming," but no one seems to know when, or how long it will last. [Top 10 Scary Sci-Fi Series]

The planet's last summer lingered for seven years, and winter has been known to last a generation on the show. Understanding when the seasons will change is just one of the many issues plaguing the characters on "Game of Thrones." But planetary science could help explain the odd seasonal changes on the show.

Seasons are controlled by the way a planet leans toward or away from its sun. For example, the Earth's axis does not run straight through the planet. Instead, it has a slight tilt that points the Northern Hemisphere toward the sun during part of the planet's orbit (causing summer) and away for another part (causing winter).

It's possible that a "wobbly" axis could create variable seasonal length, said Greg Laughlin, an astrophysicist at the University of California, Santa Cruz, but not necessarily on the timeline that show presents.

A wobbly tilt won't create rapid seasonal changes over the course of years or even decades, Laughlin said. Variability in the length of seasons happens after thousands of years. In other words, the characters on the show would not be alive to see a distinct change in the length of any of the seasons.

Seasons are also dependent upon the kind of planetary system the exoplanet finds itself in, Laughlin told Space.com (sister site to LiveScience.com).

"One situation that will lead to wildly variable seasons over long periods of time is if the planet in question is a member of a strongly interacting multiple planet system," Laughlin said, describing how a planet's orbit could be pulled out of whack by another planet.

The genetics of incest

In the first season of "Game of Thrones," viewers learned that siblings Cersei and Jaime Lannister have an ongoing incestuous relationship that produced three children, including the evil King Joffrey. Viewers also learned that incest routinely occurred among the Targaryens, which resulted in some insane family members, and among the wildings — the wildling Craster routinely beds his daughters.

The effects of incest are also well-known to followers of European royalty: The last of the Habsburg dynasty, King Charles II of Spain, was so physically incapacitated he constantly drooled and couldn't even chew his own food. Mentally disabled to the point of feeble-mindedness, it's no surprise that Charles II was also infertile and produced no offspring.

Researchers have found that most people have a built-in "kinship detector" that causes us to resist any sort of incestuous relationship — but it's not foolproof. Siblings who are raised apart from one another would not have the same aversion to each other as siblings who are raised together, according to research published in the journal Nature.

Other researchers have noted that incest occurs among animals, including male chimps that attempt intercourse with their mothers. "These systems aren't foolproof," Debra Lieberman, an evolutionary psychologist at the University of Hawaii, told LiveScience. "Sometimes the [chimp mother] lets her male offspring mount her if they're frightened and want to calm down."

David Spain, a University of Washington anthropologist, said incest "defeats the whole point of sex" — mixing up the gene pool — and is ultimately why the behavior is so rare among first relatives.

"Cousin marriages don't have as much in the way of deleterious effects, so we see those partnerships more often," Spain said. "Evolution weeds out the things that don't work."

Wildfire, in "Game of Thrones," is a gelatinous liquid with an eerie green color. It's also a very dangerous material that burns so hot that water will not extinguish its flames; it can also explode if handled incautiously.

Wildfire was used to dramatic effect during the naval attack on King's Landing by Stannis Baratheon. Tyrion Lannister sends a ship loaded with wildfire into Baratheon's fleet — a single flaming arrow causes a massive explosion that destroys most of Baratheon's armada.

Chemical weapons like wildfire have a long (and disturbing) history of use during warfare. An arcane substance from the ancient era, known as "Greek fire," may have inspired Martin's wildfire. Though nobody knows what exactly Greek fire was, archaeologists believe it may have been some combination of naphtha (derived from coal tar or other hydrocarbons), quicklime (calcium oxide), sulfur and other compounds.

In 2011, archaeologists investigated the remains of 20 soldiers who died in A.D. 256during a Persian attack on the Roman-held Syrian city of Dura. Tunneling beneath the city walls, the Persians laid a trap for the Romans: a chamber that filled with deadly smoke from bitumen and sulfur, which killed the soldiers instantly. [8 Grisly Archaeological Discoveries]

"Here at Dura you really have got this incredibly vivid evidence of the horrors of ancient warfare," Simon James, an archaeologist and historian from the University of Leicester, told Live Science. "It was horrendously dangerous, brutal, and one hardly has words for it, really."