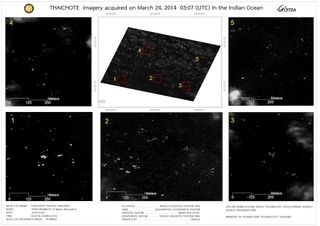 More possible debris from the missing Malaysian Airlines jet that is thought to have crashed in the Indian Ocean earlier this month was spotted by Thai satellites, according to search officials.

The potential plane debris was seen by the Thailand Earth Observation Satellite, or Thaichote, and the images have since been relayed to Malaysian authorities, said Anond Snidvongs, executive director of the Geo Informatics and Space Technology Development Agency (Gistda), a state-owned research organization, headquartered in Bangkok, that reports to Thailand's defense ministry. [Facts & Timeline About Malaysia Flight 370]

"Our satellites have located numerous amounts of floating objects at the area about 1,700 miles [2,740 kilometers] southwest of Perth and those objects have been identified as real and not just a silhouette or fish or anything else," Snidvongs told NBC News. "It's probably man-made, but we cannot identify or confirm its origin."

The floating objects were seen within the established search area in the southern Indian Ocean, he said.

The new images, captured on Monday (March 24), were posted on the Gistda website. These potential new leads come a day after a French satellite spotted a debris field consisting of 122 floating objects located roughly 1,600 miles (2,575 km) off the coast of the Australian city of Perth.

The Malaysian Airlines jetliner has been missing since March 8, when it mysteriously disappeared during a scheduled flight from Kuala Lumpur to Beijing. The precise whereabouts of the plane, and the 239 people onboard, remain unknown, but an ongoing investigation has concentrated search efforts within a swath of the southern Indian Ocean.

Earlier this week, Malaysian Prime Minister Najib Razak announced that further analysis of data from the British Inmarsat satellite company concluded that Flight 370's last known position was in the middle of the Indian Ocean, off the west coast of Perth.

"This is a remote location, far from any possible landing sites," Razak said Monday. "It is therefore with deep sadness and regret that I must inform you that, according to this new data, flight MH370 ended in the southern Indian Ocean."

An international search effort, led by the Australian Maritime Safety Authority, is ongoing across the southern Indian Ocean. Patrol planes and ships from the United States, Australia, New Zealand, Japan, China and South Korea remain active in the area.