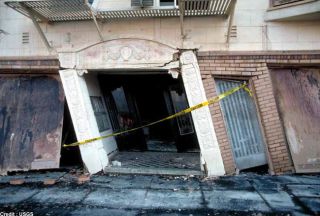 House Repairs Itself in Earthquake

Scientists have finally figured out what might have caused a series of devastating earthquakes that struck the Midwest nearly 200 years ago at a set of faults that has confused geologists for a long time.

And the results suggest the region, still seismically active today, is going to keep shaking for a long time, and another big one will hit on the same 500-year cycle that has rocked the Heartland for as far back as records, legends and memory serve.

The largest of three or four big seismic events that stretched from December 1811 to February 1812 is called the New Madrid Earthquake and had an estimated 8.0 magnitude, strong enough to cause the nearby Mississippi River to temporarily flow backward. Its epicenter was in the town of New Madrid in southeast Missouri, near the Kentucky and Tennessee state lines. Hundreds of aftershocks followed for several years.

The damage from the New Madrid quake was bad enough in the early 19th century—half of the town was destroyed, but with many more people and buildings now in the area, a similar event in the region today would be devastating, seismologists and engineers agree.

The seismic zone today generates about 200 tiny quakes annually, but it also let loose a magnitude 4.1 quake in February 2005 and a magnitude 4.0 quake in June 2005. An estimate from the 1980s asserted a 9-in-10 chance of a magnitude 6 or 7 temblor occurring in this area within the next 50 years. Later estimates have reduced this probability somewhat, though there is no consensus among researchers.

These mid-continent temblors have long fascinated seismologists because of the mysterious origin of earthquakes that occur not at the edges but in the center of tectonic plates such as the North American Plate that underlies the continent.

One team of seismologists had thought that high density pillow lavas in the lower crust beneath the New Madrid region could have pulled the crust downward and thereby generated surface stresses that triggered the quakes.

Now, Allessandro Forte of the Université du Québec à Montréal and his colleagues have arrived at a more dramatic mechanism—an ancient, giant slab of Earth called the Farallon slab that started its descent under the West Coast 70 million years ago and now is causing mayhem and deep mantle flow 360 miles beneath the Mississippi Valley where it effectively pulls the crust down an entire kilometer (.62 miles).

"This remarkable localization of flow in the mantle below New Madrid, originating so deep below the surface, was completely unrecognized prior to our work," Forte told LiveScience.

Slabs like this that sink oceanic crust are called subduction zones, and those adjacent to Japan produce intense and damaging seismic activity.

"We have discovered an analogous subduction zone, deep inside the Earth below the central Mississippi River Valley," Forte said.

Forte and his colleagues at the University of Toronto and the University of Texas based their findings on high-resolution seismic tomography images that were used to predict the topography and viscous flow of the mantle under and around North America. They used the model to focus on the New Madrid seismic zone and propose that the descending slab and associated mantle flow directly below the New Madrid seismic zone strains the overlying crust, causing seismic ruptures.

The results were published in a recent issue of Geophysical Research Letters.

The Farallon plate will continue to descend into the deep mantle and thus to cause mantle downwelling in the New Madrid region for a long time.

"[This] suggests that the seismic risk in the New Madrid region will not fade with time," Forte said.

The fault structure under the New Madrid region is a "failed rift" created by the opening of the ocean that later became the Atlantic Ocean 650 to 600 million years ago, Forte said.

That activity also caused rifts in the St. Lawrence, Saguenay and Ottawa river valleys in Canada, where there is similar mid-continental quaking, he said. Another set of faults far from the boundaries of the North American Plate are associated with the Keweenawan Rift, a 1240-mile-long rift in the area surrounding Lake Superior.