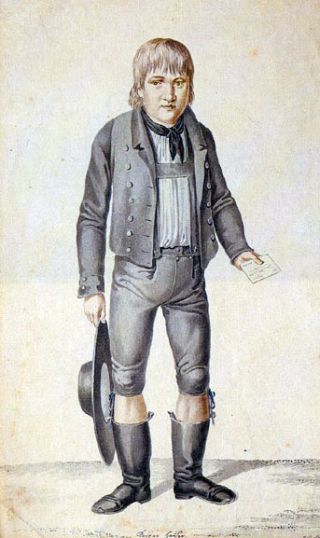 An illustration of Kaspar Hauser, from about 1828.
(Image: © Public domain.)

On May 26, 1828, a teenager was found wandering a public square in what is now Nuremberg, Germany. He wore tattered clothing and clutched an envelope containing two letters. The first was addressed to the captain of a local cavalry regiment asking him to take the young lad into his charge, apparently written by an anonymous poor laborer who found and raised the abandoned boy but who could no longer keep him. A second letter, dated 1812 and unsigned but apparently written by his mother, stated that the boy's father was no longer alive, that she could not take care of him, and he was being sent to join the military.

The boy, about 16 or 17, seemed confused and appeared unable to read or write other than his name, "Kaspar Hauser." When asked about his life, at first he could only say he didn't know who he was (other than his name) or where he had come from. Hauser acted strangely, for example preferring bread and water to meats and vegetables, and having no civilized manners. But within several weeks, much to the astonishment of everyone, he apparently learned to read and write. The following year, capitalizing on his newfound fame, his autobiography was published in which he claimed to have spent his entire life in a small, dark room, sleeping on straw and fed by unseen strangers.

Hauser became famous, with hundreds of books, magazine articles, films, and even plays written about him. As one article published in the November 1874 issue of "Overland Monthly and Out West Magazine" noted, "One of the strangest stories of the century is that of Kaspar Hauser ... for a quarter of a century (1828-1853) it is doubtful if any single individual in all Europe was so much discussed, or awoke so great an interest and curiosity. The newspapers on both sides of the ocean were full of him; pamphlets and books were printed to sustain this or that theory of his birth and belongings; philanthropers, philosophers, and savants were aroused on his behalf."

Adding intrigue and tragedy to an already baffling case, there were apparently several attempts on his life, the last one coming five years after his discovery, when he was fatally stabbed in 1833.

So who was this mysterious boy? Some people believe that Hauser was an undiagnosed epileptic and that some of his claims and visions might be medical in origin; others believe that the poor boy must have been delusional and driven mad by the neglect and abuse he suffered for much of his life (assuming, of course, that his story of abuse was true).

One widely repeated conspiracy theory holds that Hauser was actually the rightful heir to a royal throne, secreted away for some nefarious reason. After all, many said, why would the boy have been so mistreated, and why would several assassins try to kill a teenage boy, if his existence wasn't a threat to someone powerful? Though popular, this idea has been widely discredited by scholars as unlikely. The gothic idea that a mysterious person of unknown origin may really be, through the machinations of a powerful conspiracy, the rightful heir to royalty was certainly not unique to Hauser. In fact many such stories and rumors were popular in the first half of the nineteenth century; Alexandre Dumas famously used that plot device in his book "The Man in the Iron Mask" in the mid-1800s.

Theories about Kaspar Hauser's true identity are like theories about Jack the Ripper's true identity: one proponent's argument seems very convincing — until you read another author's contradictory argument, which seems just as plausible. With so little verifiable information and so many rumors asserted as proven fact, it's likely that the real truth will never be known.

There is one fact that is fairly well established about Kaspar Hauser: that he was a liar. Over and over, a variety of sources agree that Hauser was prone to repeatedly exaggerate and tell tall tales. It is clear that Hauser lied about his upbringing when he claimed that he had spent his entire life alone as a prisoner in a small room without light. If this were true he would have been far more debilitated, both mentally and physically, than he was when he was found. If nothing else, he almost certainly would have suffered from rickets, a bone-softening disease that results from a lack of Vitamin D, which the body produces naturally through exposure to sunlight. There is no mention in the records of Hauser having deformed bones.

There were other problems with his story: for example, at least one of the letters he had when he was found was a crude forgery and could not have been written when it was claimed; this is because the man to whom the letter was addressed, an army captain, was not in Nuremberg in 1812 when the letter was written, but he was there when it (and Hauser) first appeared a decade later in 1828.

At the time many suspected that Hauser faked the attacks and "attempted assassinations" on himself. This is hardly a thing of the past; even today people sometimes fake assaults, abductions, and even their own deaths. Some people who have a disease called Munchausen's Syndrome intentionally injure themselves for sympathy and attention. Nor is it unheard of for people to sometimes fake having grown up abandoned or even raised by animals; in 2011, a mysterious teenager calling himself Ray showed up at a police station in Germany, claiming to have lived alone in a forest for at least five years. The boy, who was in good health and spoke English and German, claimed not to know his identity or where he came from. After nearly a year of investigation the police discovered that "Ray" was actually a 21-year-old Dutchman who got bored with his office job and decided to pull a massive hoax by claiming to be a semi-feral wild child.

Hauser's death is widely seen as suspicious, and his claim of being attacked is contradicted by several piece of damning evidence, including what was — and wasn't — found at the scene of the attack. At Hauser's direction, after the attack a small purse was found with a note that he claimed his attacker gave to him that, amazingly, mentioned his assailant's hometown. Why an assassin would intentionally give his victim a handwritten note that would later be discovered and partially identify him strains credulity. Even more damning for Hauser's tale is what wasn't found in the gardens where he said he was attacked: a second set of footprints in the snow. It is widely believed that Hauser stabbed himself (probably for attention) and had simply injured himself more grievously than he had intended.

Since it's clear that Hauser told lies about both the beginning and ending of his life, there seems little reason to credit anything he said about his life as truth. The best evidence is that much of the mystery about Kaspar Hauser was manufactured by Hauser himself, either as a hoax or because he suffered from a mental illness. We may never know his motives, but we do know that being famous was very important to him, as he eagerly sought and enjoyed his international notoriety. Whether con artist or genuine mystery, in the end Hauser won; his true nature and identity is still debated and discussed today, nearly two centuries after his birth.