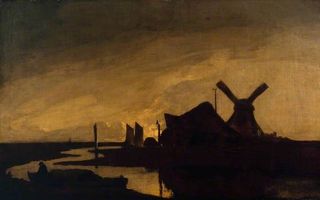 Moonrise on the Yare
(Image: © Wikipainting)

Through an artist's eye, scientists are tracking the climate swings caused by volcanic eruptions.

Volcanoes spew ash and reflective particles called aerosols into the atmosphere when they erupt. Big blasts can cool the planet (by reflecting sunlight) and turn the evening skies scarlet, creating such vivid sunsets as those seen after the massive 1883 Mount Krakatau (Krakatoa) eruption in Indonesia. Some art historians think the roiling orange and red sky in Edvard Munch's "The Scream," painted in 1893, was inspired by Krakatoan sunsets.

By studying the color of sunsets in paintings, climate scientists now think they can gauge the natural cooling that occurred after historical volcanic eruptions. Accounting for these long-vanished effects could help improve climate models that predict future global warming, according to the study, published today (March 25) in the journal Atmospheric Chemistry and Physics.

The scientists analyzed 554 digital images of paintings in the Tate Gallery and the National Gallery in London. Many of the works were painted by landscape artist J.M.W Turner, who captured the changing aerosol levels over Britain following the 1815 eruption of Tambora volcano in Indonesia. Tambora triggered the "year without a summer," when global cooling ruined summer crops and thousands died of starvation. The team also found some 50 pictures by other artists that were painted within three years of volcanic eruptions between the years 1500 and 2000. [Volcanoes in Art: A Gallery of Climate Change Clues]

By measuring the amount of red and green in the paintings, the researchers were able to figure out past aerosol pollution levels. More aerosols meant redder sunsets, because the tiny particles are small compared to the wavelength of visible light, More long wavelength red light makes it through the aerosols, and shorter wavelength blues and violets get scattered by the aerosol particles.

"Regardless of the school and style, all painters provided quite accurate aerosol information when red/green ratios were examined," lead study author Christos Zerefos, a professor of atmospheric physics at the Academy of Athens in Greece, said in an email interview.

The study compared the aerosol ratios from the paintings with those from environmental records such as ice cores, and found good agreement, Zerefos said. Since the onset of the Industrial Age in the 1850s, man-made aerosol pollution in the atmosphere has increased.

"It is remarkable that the red/green ratios have followed the changes in atmosphere estimated by completely different methods with such precision," Zerefos said.

The results could help researchers better estimate a modern atmospheric phenomenon called global dimming, which is caused by aerosols blocking sunlight. The dimming from man-made aerosols may have slowed climate change since the 1950s, and some experts think global warming could accelerate as air pollution is reduced. By looking at how volcanoes cooled the Earth in the past, scientists may gain a more thorough understanding of the effects of modern aerosol pollution.

"We wanted to provide alternative ways of exploiting the environmental information in the past atmosphere in places where, and in centuries when, instrumental measurements were not available," Zerefos said.