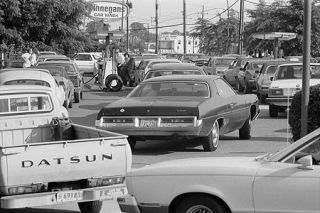 Forty years ago this month, the entire world breathed a heavy sigh of relief — though that sigh, and the reason for it, are largely forgotten today.

In March 1974, the Organization of the Petroleum Exporting Countries (OPEC), made up primarily of Arab nations, decided to end a six-month embargo that had crippled much of the global economy, frayed the Western world's social fabric and exposed mankind's utter dependence on one limited resource: oil.

Much has changed in the decades since, but is the United States (or any Western power) closer to the "energy independence" that was presented as a critical goal by President Richard Nixon — and every president since? [OPEC Oil Embargo: A Timeline]

Few who were born after the 1960s remember what it was like for consumers during the oil embargo, which started in October 1973 and lasted through a long, cold winter.

"You would rise before dawn," wrote Daniel Jack Chasan in the Seattle Times, "climb into a cold car; drive, slowly, to a gas station … get in line behind the people who had left home even earlier; turn off the engine to save gas; pull your jacket up around your neck; settle down and wait until somebody arrived to turn on the lights, unlock the pumps and maybe let you buy a little gas."

Almost overnight, the price of oil jumped 400 percent, from $3 a barrel before the embargo to $12 a barrel during the embargo, which began as a response to U.S. support for Israel during the 1973 Arab-Israeli War.

As the embargo extended to Western Europe and Japan, the industrialized world's prodigal use of oil and gas came to a screeching halt. By February 1974, about 20 percent of U.S. gas stations had no gasoline to sell, and some simply went out of business.

Cars, which were previously sold for their looks and luxury, were suddenly being marketed for energy efficiency — a tactic that helped Japanese and European manufacturers of small, fuel-sipping cars establish a beachhead in the lucrative U.S. auto market.

Governments react to the embargo

The response to the oil embargo was nothing short of galvanizing. People worldwide became aware — many for the first time — that electric power plants usually rely on oil or coal to operate. This awareness ushered in a new era of energy-efficient appliances, "lights-out" campaigns and home weatherization projects.

In the months and years following the oil embargo, the U.S. government responded by establishing a cabinet-level Department of Energy. Congress also passed important legislation, such as the Energy Reorganization Act of 1974, the Energy Policy and Conservation Act of 1976, and the National Energy Act of 1978.

These efforts had real payoffs: From 1977 to 1985, the U.S. economy grew 27 percent, even as oil use fell 17 percent and imports of oil fell 50 percent, according to the Rocky Mountain Institute (RMI), a nonprofit energy research center.

In an important symbolic gesture, President Jimmy Carter in 1979 installed solar panels on the roof of the White House. But those, like Americans' newfound embrace of energy conservation, didn't last.

Despite the impressive gains made during and after the oil embargo — it ended when Israel withdrew its troops from the west side of the Suez Canal in March 1974 — not everyone was enthusiastic about energy conservation.

"Conservation means we'll be hot in the summer and cold in the winter," Ronald Reagan famously quipped, shortly before he entered the White House in 1981, ushering in an era of deregulation and knee-jerk support for the oil and gas industries.

"Policymakers, instead of finishing the job, hit the snooze button for a decade," Amory B. Lovins, a scientist with RMI, wrote in a recent blog post.

"When the crisis passed, everything stopped," George Shultz, secretary of state during the Reagan administration, said during a 2013 presentation to the Commonwealth Club of California, referring to the oil embargo. "It's hard to keep the momentum going without a crisis."

Indeed, the reckless use of gas and oil continued unabated throughout the 1980s and 1990s. Investments in renewable energy research dwindled once the Reagan administration took office. And in another important symbolic gesture, Reagan had the solar panels on the White House roof removed in 1986.

Nonetheless, the shock waves that reverberated throughout the global economy in the early 1970s as a result of the OPEC oil embargo did have some meaningful results.

"Producing a dollar of GDP now uses less than half the energy and one-third the oil it took in 1973," Lovins wrote. "Wind and solar power, now cheaper than gas-fired power in favorable sites, added half of new U.S. generating capacity [in 2012], and making a dollar of GDP took 3.4 percent less electricity than a year earlier."

The United States consumed 34.8 quadrillion Btus of oil energy in 1973, according to the U.S. Energy Information Administration (EIA), and 40 years later, it was expected to consume just 34.2 quadrillion Btus — an impressive drop in oil consumption, considering the growth in population and economic activity since the early 1970s.

A report from oil giant BP found that in 1973, oil accounted for almost half (48 percent) of energy consumption worldwide; by 2012, oil's share of the global energy diet had fallen to one-third (33 percent).

Will fracking save us?

But while some people are heralding the world's reduced dependence on oil, others have noted a worrisome trend: the increasing availability of oil and natural gas from hydraulic fracturing, or fracking, a controversial extraction technique that has serious health and environmental risks, according to some experts. [Deepwater Horizon: Images of an Impact]

And as oil prices soften as a result of increasing supply, consumption is also expected to increase.

Last year, Reuters reported that the United States had surpassed Saudi Arabia to become the world's leading supplier of oil and gas, largely from shale deposits made available through fracking.

"That is not because of the ingenuity of government or of government officials," James Schlesinger, energy secretary during the Carter administration, told Politico. "That was the generosity of the Lord Almighty."

"We're number one, and that clearly puts us in a different position than we were 40 years ago, when we were very, very, very vulnerable," Alaska Sen. Lisa Murkowski, ranking member of the Senate Energy and Natural Resources Committee, told Politico. "That vulnerability is still there, but not nearly to the extent and to the degree that we faced four decades ago."

Other experts, however, refuse to call oil and gas from fracking a godsend, insisting that the country's reliance on fossil fuels is a dead end. [Top 10 Worst Oil Spills]

"The rotted residue of primeval swamp goo — a cubic mile of oil costing $3.5 trillion that the world burns each year, plus three cubic miles of coal and gas — is becoming no longer economic," Lovins wrote.

"Fracked oil and gas, Canadian tar sands, Saudi oil — none can beat modern efficiency and renewables on direct cost, price stability or impacts," Lovins wrote. "The end of the conflict-creating, climate-threatening Oil Age is coming clearly into view, and not a moment too soon."