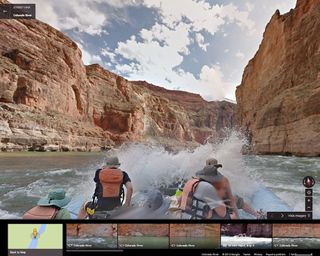 The front half of the Google Maps raft seen on Google's new Colorado River View, which launched March 13. This shot was taken at 36 Mile rapid.
(Image: © Google Maps)

Anyone with an Internet connection can now raft through rivers traversing the Grand Canyon, without getting wet: Google Maps and the nonprofit group American Rivers have launched a "Street View" of the Colorado River.

Colorado River View, as it is called, takes users through 286 miles (460 kilometers) of river. There are also Street View-style photos of five popular side trails, including the Nankoweap Granaries, storerooms built into the side of the canyon by ancient Anasazi people.

The project was first pitched by Devin Dotson, the associate director of communications for American Rivers, after he attended a meeting with the Google Earth Outreach team, which works with nonprofits and other organizations. The team was looking for new ways to use Google Street View, Dotson told Live Science. He suggested rafting a river — specifically, the Colorado River. [See Images from Colorado River View]

"They had been wanting an excuse to do the Colorado River through the Grand Canyon, but couldn't figure out how and why," Dotson said. "So they said yes, let's do this."

American Rivers has named the Colorado as one of its Most Endangered Rivers of 2013. Water from the river supports 15 percent of U.S. agriculture and provides drinking water to 36 million people, said Chris Williams, the nonprofit's senior vice president for conservation. With so much demand, the waters of the Colorado River no longer flow into the Gulf of California.

"There are just too many straws in the drink," Williams told Live Science.

There are efforts to restore this river ecosystem. The United States and Mexico have agreed to an experimental water release on March 23 that will send a pulse of life-giving liquid into the Colorado River Delta in Mexico. The goal is to restore the delta's wetlands habitat, allowing native trees to recolonize the arid region.

But the pulse is not a long-term fix. A growing population in the West means the Colorado River needs a more sustainable management plan, Williams said. Climate change, which is expected to dry out the already-arid West, will only exacerbate future water-management problems, Williams added.

Raising awareness of the Colorado's grandeur and challenges was the goal of the partnership with Google, Dotson said. In August 2013, bearing two of Google's specialized Trekker cameras attached to rafts by a custom mount, Dotson and Williams joined others from American Rivers and Google Maps. Over eight days, the team, led by the outfitter Arizona River Runners, collected snapshots of the scenery every few seconds, which was later stitched together to provide the 360-degree navigable views familiar to any Street View user.

The first rapids were a bit nerve-racking, Dotson said. "You're realizing you have this very important piece of machinery strapped to your raft," he said.  — But the Trekkers made it through just fine. One of the most magical moments of the trip occurred when the rafts traveled through a sudden squall. The clouds were spotty, letting a few luminous rays of sunlight through, and the views (and resulting Google images) were gorgeous, Williams said.

"It turned out to be some very beautiful imagery, because the desert in the rain is not something that many people get to experience," Dotson said.

The team also trekked up five side paths, including the Nankoweap granaries. They even snapped shots of bighorn sheep picking their way along the canyon walls. The photos are now incorporated into Google Maps. Alternatively, wannabe river explorers can start with 25 of the coolest shots and spots to explore.

The Grand Canyon isn't the first nonstreet location for Google Street View. The Google team has also photographed polar bears in the Canadian Arctic and corals in underwater reefs.