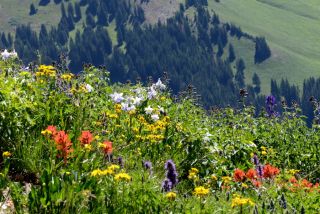 Rocky Mountain wildflowers such as these blooms in Crested Butte, Colo., now peak nearly a month earlier than in 1974, a new study finds.
(Image: © David Inouye)

From cherry blossoms in Washington, D.C., peaking earlier than in decades past to grapevines unfurling new leaves this February in California, signs of spring now come sooner than they did a century ago. But climate change means more than just precocious bloom times, a new study finds.

It turns out that relying on the first flowers of spring to gauge global warming may lead researchers to underestimate the full impact of climate change. Though some flowers may unfurl earlier because of warming, some plants shift their blooms to later in the season instead, according to the study, published today (March 17) in the journal Proceedings of the National Academy of Sciences. For example, in the Rocky Mountains in the United States, the bloom season now lasts a month longer than in the 1970s, because flowers appear both sooner and later than before, the study found.

"It's important to take a closer look in order to understand all the ways that climate change affects these wildflower communities," lead study author Paul CaraDonna, an ecologist at the University of Arizona, said in a statement.

CaraDonna and his co-authors examined nearly 40 years of wildflower records from the Rocky Mountains. Since 1974, researchers with the Rocky Mountain Biological Laboratory have counted every flower in 30 plots near the lab's home in Crested Butte, Colo. — more than 2 million blooms in all.

The flowers grow at an elevation of 9,500 feet (2,895 meters). In the past century, a combination of less snowfall and warmer spring temperatures has caused snow to melt earlier there, which can trigger earlier bloom times.

Of the 60 plant species the researchers studied, only seven moved their entire bloom cycle to earlier than it had been 40 years ago, the researchers found. That means the flowers start, peak and finish sooner. About half of the 60 plants are beginning to bloom earlier, but only about one-third are reaching their peak bloom earlier, while others are producing their last blooms later in the year, the study found. [8 Ways Global Warming Is Already Changing the World]

The date of the first spring flower advanced by more than six days per decade over the course of the study, and the last flower of fall first appears about three days later every decade. Overall, these changes boosted the wildflower season by more than a month, the researchers said. The bloom season, which used to run from late May to early September, now lasts from late April to late September.

The researchers plan to study the effect the changing bloom times will have on migratory birds and local insects. Because the same number of flowers is now spread out over more days, at peak bloom time, there may be fewer flowers.The flowering season is about one month longer than it used to be, which is a big change for a mountain ecosystem with a short growing season," study co-author Amy Iler, an ecologist at the University of Maryland, said in the statement.