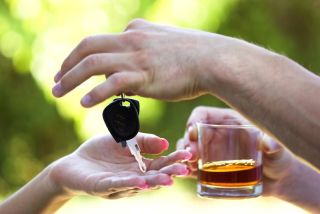 Teens who ride in a car with a driver who has been drinking are more likely to get behind the wheel themselves and drive while intoxicated, a new study suggests.

Researchers found that 10th graders who reported they had been passengers in a car with a driver who was intoxicated were 21 times more likely to drive under the influence by their senior year.

"Basically, it's about as risky for teenagers to drive while intoxicated as it is for them to ride with an intoxicated driver," said study researcher Bruce Simons-Morton, a senior investigator at the National Institute of Child Health and Human Development in Bethesda, Md.

The findings also revealed that teens who more frequently observed an inebriated driver and had earlier exposure to this behavior, were more likely to drive while intoxicated in the near future. [7 Ways Alcohol Affects Your Health]

Teens who got their driver's license at an earlier age also had increased chances of driving after drinking compared with teens who obtained their license later, according to the study.

The findings are published online today (Mar. 17) and will appear in the April issue of the journal Pediatrics.

In the study, the researchers evaluated data collected from about 2,500 high-school students in the U.S. over a three-year period, from the kids' 10th through 12th grade years.

The study asked teens how often during the past year they rode in a vehicle driven by someone who had been drinking or using drugs, and teens were also asked how often in the past month they drove after drinking or getting high.

About one in three 10th graders reported they had been a passenger in a car of an impaired driver. The researchers noted they were not able to determine whether this meant a parent, another adult or a peer was behind the wheel.

Teens who had said they had ridden with an intoxicated driver in all three years of high school were 127 times more likely to report driving after drinking themselves by 12th grade, compared with students who had never ridden with a driver who had been drinking, Simons-Morton told LiveScience.

"That's a strong risk, and it suggests this is a socially influenced behavior," he said.

When teens ride with people who have been drinking, this normalizes and socializes the behavior, Simons-Morton said. We need to understand why it seems acceptable among some adolescent groups to drive while intoxicated, or ride with an intoxicated driver, he added.

The good news is that drinking rates in the U.S. are lower than they were a decade ago for reasons that are still unclear, and drinking rates have gone down considerably in high-school-age kids, Simons-Morton said.

But the bad news is drinking and driving still remains a problem, and contributes to a large proportion of automobile crashes in teenagers and young adults.

Motor vehicle accidents are the leading cause of death among American teens. Crashes claimed the lives of 2,700 people ages 16 to 19 in 2010, and they injured more than 280,000 in the same age group, according to the Centers for Disease Control and Prevention.

"It doesn't take much alcohol to impair a teen," Simons-Morton said. "Impairment can start with one drink."

Alcohol can cloud a teenager's judgment, increasing the chances of being involved in an accident because of driving too fast or misreading a curve.

Teens are not only inexperienced when it comes to alcohol, but also they lack driving experience. This can make for a lethal combination because young people are more prone to underestimating the risks involved in both activities.

It's important for parents to monitor teens' driving behavior, and to be well informed about the peers their kids are riding with, Simons-Morton said.

Delaying licensing is another good way to reduce teens' risk of drinking and driving, he added.

As for teens, the take-home message should be that "no friend lets their friend ride or drive when intoxicated," Simons-Morton said.