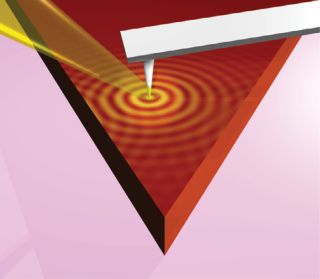 A beam of light can make waves in crystals, and those waves can be "tuned" — a phenomenon that might open up new technological possibilities, researchers say.

At the University of California, San Diego, physicists led by Dimitri Basov and Siyuan Dai fired a beam of infrared light at a tiny crystal of boron nitride. They focused the beam on the tip of an atomic force microscope. An atomic force microscope probes surfaces at the scale of atoms and molecules with a needle at the end of an arm, like that on a vinyl record player. The microscope transferred the momentum from the light to the crystal.

The light generated ripples — waves — in the boron nitride. The waves, called phonon polaritons, had wavelengths as short as those of ultraviolet light, about 300-400 nanometers, or billionths of a meter. [Magnificent Microphotography: 50 Tiny Wonders]

"A wave on the surface of water is the closest analogy," Basov said in a statement. "You throw a stone and you launch concentric waves that move outward. This is similar. Atoms are moving. The triggering event is illumination with light."

A chemical used in cosmetics, boron nitride (BN) is a van der Waals crystal, which means its atoms form layers, stacked on top of one another and held together by forces between molecules. By adjusting the wavelength of the light and the number of layers of boron nitride, the researchers were able to adjust the shape and size of the polaritons.

"The key novelty is that the wave properties can be tuned by altering the number of atomic layers in a [boron nitride] specimen," Basov told Live Science.

Since it's possible to control the size of the waves, it's also possible to use the crystal to transmit information, in a way similar to how light is used in radio communications. "You can direct information where you want it at the nanoscale," Basov said.

The ability to tune polaritons also means one can control the flow of heat in a material, since heat is just the movement of atoms and molecules in a substance.

Control of waves could be important to building nanometer-size circuits. Right now, information is transmitted between circuit components with electrons. Light has all kinds of properties that make it useful for transmitting data; for instance, it's fast. But to use light waves to transmit information, a simple antenna generally has to be at least half as large as the light waves (this is why antennas for radios are as big as they are). It's possible to make them shorter, but there are trade-offs in efficiency. [The 9 Biggest Unsolved Mysteries in Physics]

Radio waves, in even the fastest networks, have wavelengths measured in tenths of a millimeter. The infrared waves common in TV remotes are even smaller, just micrometers long. Even so, that's thousands of times the size of typical computer circuits, which are tens of nanometers across — they are simply too small to use radio frequencies. (When you use a Wi-Fi network, the radio signal is converted into electrons so the computer can "hear" it, and requires an antenna — the Wi-Fi radio can be large compared to a processor.)

Making the radio waves in the signal shorter isn't always an option; such wavelengths eventually move from radio into the visible light range, and that requires re-tooling the transmitter and receiver. Also, how well waves transmit can be highly dependent on the wavelength used and the environment they are in. For example, longer radio waves bend around corners more easily than visible light, which is why you don't need to be in the line of sight of the local FM station.

The ability to transmit light-like waves in a solid substance would mean that technologists would get many of the advantages of light waves, without some of the problems of generating ultra-short wavelength signals like the need for a transmitter/receiver setup.

Smaller circuits also have a bigger problem radiating away heat. Computers have fans to keep the processors cool, but using light to control the temperature might mean future machines could dispense with them.

The work started with experiments in graphene, Barsov said. Graphene, which is made of carbon, also forms single-molecule layers, and also can make polaritons in response to light. The waves, however, don't last as long as they do with boron nitride. "People thought boron nitride was just a bystander material – we never thought it would be useful," Basov said.

The work is detailed in the March 7 issue of the journal Science.