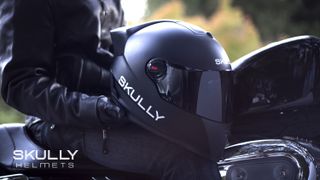 A "smart" motorcycle helmet could let drivers see in all directions, while looking only ahead.
(Image: © Skully Helmets)

A total of 48 startup companies competed on Saturday and Sunday, in six categories including wearable tech, entertainment/content, enterprise/big data, health, social and innovative world technologies. Three teams were named finalists in each category, and the winning teams each took home $4,000.

The winner of the wearable category was the Silicon Valley startup Skully Helmets, creator of an augmented-reality motorcycle helmet. The helmet has a 180-degree rear-view camera that projects images to a transparent headset display, so the driver's eyes can see around them in every direction, while never having to leave the road ahead. [Images: The Best Wearable Tech of SXSW 2014]

Today, "helmets exist solely for the sake of saving your head when you hit the ground," a Skully Helmets representative told Live Science.

Skully Helmets aims to create "the safest motorcycle helmet on the face of the planet." The prototype helmet was designed for people riding motorcycles, but the company has had a lot of demand for bicycle and skiing helmets, as well as for military applications.

The other finalists in wearable tech were Toronto-based Bionym, developer of the "Nymi," a fitness tracker that measures the wearer's unique cardiac rhythm to confirm their identity, and Netherlands-based Pauline van Dongen, a fashion designer developing solar cell-integrated garments.

Computer technology company Oracle sponsored the events. Startups pitched their products to judges from venture capital, industry and the media.

Other companies that competed in the wearable category included San Francisco-based Fashion Discovery Labs, creator of an app that that lets Google Glass users instantly buy any garment they see on the street, and Staten Island-based brand Jon Lou, developer of an Italian-inspired handbag that can charge a phone or tablet.

The Skully Helmets team was thrilled to win the award. "We were competing against the smartest people in the world today," the company representative said, "and it’s a measure of luck, skill and some crazy third variable that we're up here today."