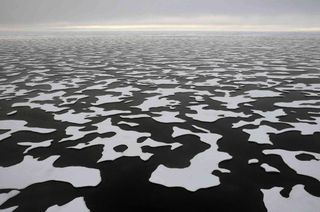 NEW YORK — Antarctica may be the last place one would expect to find a mathematician, but Ken Golden isn't your average mathematician.

Golden, a mathematician at the University of Utah, is using math to model the melting of the polar ice caps. He has been on multiple expeditions to the Arctic and Antarctic, where he studies how the microscopic structure of ice affects the large-scale melting of the ice caps.

"We're using pretty sophisticated mathematics to better understand the role of sea ice in the climate system, and, ultimately, to improve our projections of climate change," Golden said in a talk Wednesday (March 6) at the National Museum of Mathematics in New York City. [Gallery: A Mathematician Goes to Antarctica]

Golden's interest in ice started with his love of skiing. In high school and college, he studied the physics of sea ice, but his main interest was mathematics. "I loved sea ice, but I had no intention of building my career around it," Golden told Live Science. Later, he realized that sea ice could be modeled using the same math as composite materials, whose components contain different physical or chemical properties.

Climate scientists are trying to determine whether the planet will reach a tipping point in sea ice melt, from which return would be impossible, Golden said. The challenge, he added, is to represent the sea ice more accurately in models and to link what's going on at the microscopic scale with what's happening at the macroscopic scale. For example, the pattern of melt channels through the ice resembles the pattern of melted sea ice as seen from space.

The effects of climate change are most noticeable in the planet's polar regions. The extent of Artic sea ice melt has outpaced model predictions, reaching a record low in September 2012 when more than half of the sea ice disappeared.

Sea ice contains a small percentage of brine, and the fraction (by volume) and connectedness of the salty fluid pockets determine the permeability of sea ice — in other words, how easily water can flow through the ice. For the permeability of columnar sea ice (whose crystals form long columns), Golden has discovered what he calls the "rule of fives": If the ice contains less than 5 percent brine, water can't flow through it, but any more than that and the water will flow through.

In his talk, Golden led the audience in an interactive demonstration of this rule. The audience members were seated in rows, and each person rolled a die. Those who rolled certain numbers remained seated, while everyone else moved aside. The seated people held hands with their neighbors in nearby seats or rows, and the goal was to see whether an unbroken chain (representing a channel through sea ice) could be formed.

Golden's talk was full of surprises. For example, it turns out that sea ice bears a structural resemblance to compressed powder, a coating used on the outside of stealth bombers to absorb radar. Sea ice also absorbs radar, making it very difficult to measure the ice's thickness — an important problem for climate change modeling.

At the end of his talk, Golden showed a video of one of his expeditions to Antarctica. The video contained arresting footage of ocean waves propagating through floating sea ice, Golden and his team drilling for ice cores, and shots of charismatic emperor penguins. It was a happy note in what has been a not-so-happy story.

"Our climate is changing, and the evidence is clear," Golden said.

Editor's Note: This article was updated to clarify the name of the math museum as the National Museum of Mathematics, and to correct inaccuracies in the descriptions of sea ice and stealth bombers.