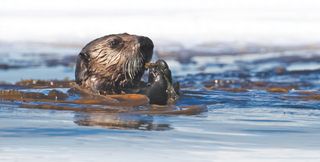 Nearly a quarter of a century after the Exxon Valdez disaster dumped 11 million gallons (40 million liters) of oil into Alaska's Prince William Sound, sea otter numbers have rebounded to levels seen before the spill, the U.S. Geological Survey announced Friday (Feb. 28) with a new study.

Sea otters (Enhydra lutris), found along the Pacific coasts of North America and Northeast Asia, are one of more than 20 types of animals that make their home near the shore affected by the March 1989 oil spill. The disaster occurred in prime sea otter habitat, according to the USGS study. The oil "drastically reduces" the ability of the otters' fur to provide insulation, the report said.

It is estimated that several thousand sea otters perished because of the spill, the USGS said in a statement, and subsequent monitoring showed that the animals were slow to recover, likely because oil lingering in their environment continued to affect them.

"Although recovery timelines varied widely among species, our work shows that recovery of species vulnerable to long-term effects of oil spills can take decades," said lead author of the study, Brenda Ballachey, a USGS research biologist.

Researchers used a variety of methods to gauge how sea otters are fairing today. The scientists conducted aerial surveys that counted the animals' numbers, examined causes of sea otter deaths and looked at gene expression in sea otters to check for influence from oil exposure. All of these measures pointed to shifts back to pre-spill levels.

The aerial surveys found numbers of sea otters comparable to those seen before the tanker Exxon Valdez ran aground on Bligh Reef, and the gene expression data suggested a reduction in oil exposure since 2008. However, another recent study involving USGS scientists found protected pockets of oil that had been virtually unchanged since the spill.

Examinations of sea otter carcasses showed that most deaths now occur in very old and very young sea otters, as was the pattern before the spill. By contrast, most deaths occurred among middle-aged sea otters in the spill's aftermath.