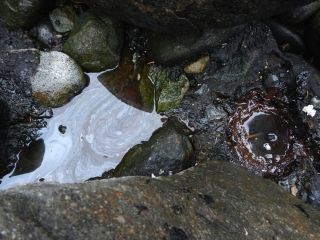 Oil from the 1989 Exxon Valdez spill trapped between rocks on a beach in the Gulf of Alaska, more than 20 years after the spill.
(Image: © Gail Irvine, USGS)

Small pockets of oil from the 1989 Exxon Valdez oil spill still persist in pockets along Alaska's coasts, hidden by rocks that have kept the elements from breaking down the crude oil, scientists reported yesterday (Feb. 27).

During a study aimed at finding out how long oil persists after a spill, a group of scientists examined the Shelikof Strait coastline southwest of the spill site. They found pockets of oil hidden behind stable boulders that seem to protect the oil from the actions of waves and other forces that break the oil down over time, keeping it in a state similar to when it was first spilled.

"To have oil there after 23 years is remarkable," Gail Irvine of the U.S. Geological Survey's Alaska Science Center said in a statement. "We have these marked boulders whose movement we've been studying for more than 18 years. The oil itself has hardly weathered and is similar to 11-day-old oil."

Oil drilled from different locations has different chemical fingerprints, and chemists were able to test the unweathered oil and confirm that it came from the Exxon Valdez, which was carrying oil from Alaska's Prudhoe Bay. [SOS! Major Oil Disasters at Sea]

Christopher Reddy, whose lab at the Woods Hole Oceanographic Institution in Massachusetts did the "fingerprinting" of the oil, said that the study showed something of a silver lining in the Exxon Valdez spill, in that scientists are learning which compounds in oil are more or less susceptible to weathering and where oil tends to persist after a spill.

"One lesson is that if you are responsible for cleaning up a spill, you want to be proactive about cleanup behind the boulders," Reddy said in the statement.

The researchers, who presented their work yesterday at the American Geophysical Union's annual Ocean Sciences Meeting in Honolulu, did note that the amount of oil they found is a small fraction of the total oil spilled and that the findings can't necessarily be extended to the whole of the spill area.