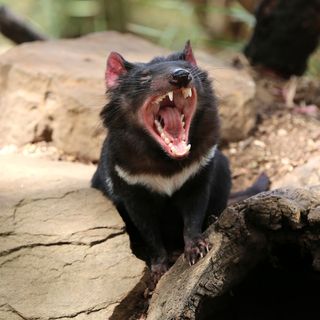 For the most part, Tasmanian devils are solitary animals that only come together to breed, which usually occurs between February and April (late summer and early fall in Australia).
(Image: © Bernhard Richter | Shutterstock)

Not completely unlike the popular Looney Tunes character, Tasmanian devils are best known for their growly, aggressive behavior — a disposition they actually maintain in the bedroom.

For the most part, Tasmanian devils are solitary animals that only come together to breed. "But they also socialize or semi-socialize if they come across a large carcass to feed on," Tamara Keeley, a wildlife reproductive biologist at the University of Queensland in Australia, told Live Science.

Wild devils in Tasmania tend to mate between February and April (late summer and early fall in Australia). Females have three estrous cycles in this period — if they don't get pregnant during their first cycle, they have two more tries before the breeding season is over. [Animal Sex: 7 Tales of Naughty Acts in the Wild]

To attract mates, both males and females scent-mark the ground, rocks and trees using the scent glands near their anus. "They drag their bums across the ground," Keeley said, adding that they also scent-mark objects by rubbing their faces against them.

Female devils prefer to mate with the largest, most dominant males. If multiple males show up at a female's door, they will battle for the right to mate with her.

But coming out on top doesn't guarantee the female's affection — a male also has to physically force his potential mate into submission. "A female will test the male to see if he is good enough for her standards," Keeley said. In fact, females are known to reject small males vocally and physically.

Once a female accepts a male, he will bite the scruff of her neck and drag her back to his den, where he will further assert his dominance by pushing and nudging her. The pair will then mate for a few minutes to over an hour.

To make sure the female has his babies, the male will guard her until she's no longer in estrous (a week or so later), before he moves on to find another mate. The pair will not eat during this lockdown, though the male may escort the female out of his den to drink water, Keeley said. If the female tries to escape, the male will chase her down and drag her back home.

As can be expected, males aren't always 100 percent successful at keeping females all to themselves. Indeed, a litter of pups can have multiple fathers, suggesting females do sneak away from their captors to mate with other males.