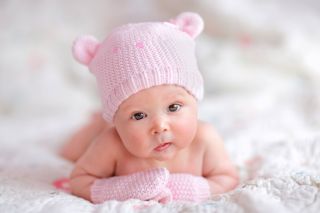 A newborn baby in a pink hat and mittens.
(Image: © Natalia Kirichenko, Shutterstock )

With their uncoordinated movements and unfocused eyes, newborns may seem pretty clueless about the world. But new research finds that from the minute they are born, babies are well aware of their own bodies.

Body awareness is an important skill for distinguishing the self from others, and failure to develop body awareness may be a component of some disorders such as autism. But little research has been done to find out when humans start to understand that their body is their own.

To determine babies' awareness of their bodies, the researchers took a page from studies on adults. In a famous illusion, people can be convinced that a rubber hand is their own if they see the hand stroked while their own hand, hidden from view, is simultaneously stroked.

These studies show that information from multiple senses — vision and touch, in this case — are important for body awareness, said Maria Laura Filippetti, a doctoral student at the Center for Brain and Cognitive Development at the University of London. [Incredible! 9 Brainy Baby Abilities]

To find out if the same is true of babies, Filippetti and her colleagues tested 40 newborns who were between 12 hours and four days old. The babies sat on the experimenter's lap in front of a screen. On-screen, a video showed a baby's face being stroked by a paintbrush. The researcher either stroked the baby's face with a brush in tandem with the stroking shown on the screen, or delayed the stroking by five seconds.

Next, the babies saw the same video but flipped upside down. Again, the researcher stroked the infants' faces in tandem with the upside-down image or delayed the stroking by three seconds.

Working with babies so young is a challenge, Filippetti told LiveScience.

"It is challenging just in terms of the time you actually have when the baby is fully awake and responsive," she said.

To determine whether the babies were associating the facial stroking they saw on-screen with their own bodies, as in the rubber-hand illusion, the researchers measured how long the babies looked at the screen in each condition. Looking time is the standard measurement used in infant research, because babies can't answer questions or verbally indicate their interest.

The researchers found that babies looked the longest at the screen when the stroking matched what they felt on their own faces. This was true only of the right-side-up images; infants didn't seem to associate the flipped faces with their own. [See video of the baby experiment]

The findings suggest that babies are born with the basic mechanisms they need to build body awareness, Filippetti and her colleagues report today (Nov. 21) in the journal Current Biology.

"These findings have important implications for our understanding of body perception throughout development," Filippetti said. Perhaps more important, she added, becoming more knowledgeable about normal development may help scientists better understand autism and related disorders. Autism research frequently focuses on abnormalities in social development, Filippetti said, but less is known about how children with autism perceive the self.

Next, Filippetti and her colleagues hope to use noninvasive brain imaging to determine how the newborn brain responds to sensory input to build body awareness.

Editor's Note: This article was updated at 2 p.m. Eastern to correct the timing of the delay in some sessions of the experiment. It was five seconds, not three.