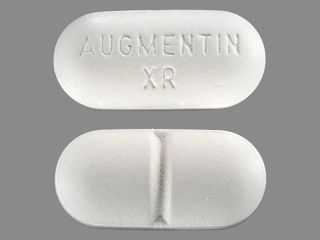 The extended-release tablet form of Augmentin is white and oval.
(Image: © National Library of Medicine)

Augmentin is a brand name for an antibiotic, called co-amoxiclav, that is used to treat a wide range of conditions, from bronchitis to Lyme disease. It is one of the most commonly prescribed antibiotics for children, frequently dispensed for ear infections.

Antibiotics work by attacking the cell wall of bacteria that are harming the body, or they prevent the bacteria from replicating. [How Do Antibiotics Work?]

The drug is a combination of two active ingredients: amoxicillin and clavulanic acid. Together, the drugs fight bacteria that would ordinarily be resistant to amoxicillin alone.

The antibiotic can also be used on animals. Ruminants, swine, horses, dogs, cats and poultry are often prescribed Augmentin for various ailments.

Augmentin is typically taken orally, in pill form for adults, and in a liquid (often flavored) suspension for little children. Doctors prescribe the drug so often because it works against many types of disease-causing bacteria.

"When I travel I always have some Augmentin in my travel bag," because it works against so many common infections, said Dr. Alasdair Geddes, an emeritus professor of infectious diseases at the University of Birmingham in England, who ran some of the first clinical trials of Augmentin.

Augmentin is one of the workhorses of the pediatrician's office, prescribed for ear infections that are resistant to amoxicillin alone, sore throats and certain eye infections. The drug is also a powerful agent against bronchitis and tonsillitis caused by bacteria (though many cases of sore throat are viral in origin).

In addition, the drug can fight pneumonia, urinary tract infections, gonorrhea and skin infections. The drug has also been seen as a good potential candidate for treatment of Lyme disease, chlamydia, sinusitis, gastritis and peptic ulcers, according to a 2011 study in the International Journal of Pharmacy and Pharmaceutical Sciences.

Though Augmentin hasn't been conclusively shown to be safe during pregnancy, some studies suggest it is unlikely to do harm to pregnant women or their fetuses, according to a 2004 study in the British Journal of Clinical Pharmacology. The Mayo Clinic also lists amoxicillin as a safe antibiotic for pregnancy. Women who are pregnant should check with their doctors before taking the drug, though. The Food and Drug Administration classifies Augmentin as a class B drug, meaning there is no evidence for harm.

The most common side effects for Augmentin are nausea, upset stomach, gas and diarrhea. Largely, this is because clavulanic acid can irritate the gut, Geddes said. In addition, like other antibiotics, Augmentin wipes out a broad class of bacteria, so it may also kill "good" bacteria that line the gut and help digest foods. Augmentin can also leave people more prone to yeast infections — again, because it wipes out good bacterial populations that normally inhibit the growth of yeast.

People who are allergic to penicillin-like drugs are often allergic to Augmentin as well, because it contains amoxicillin. To test for this drug allergy, doctors can do a skin-prick test called PrePen. In some instances, an allergy to Augmentin can lead to anaphylaxis, a deadly allergic response that can cause the narrowing of the airways, the swelling of the lips and tongue, and a deadly drop in blood pressure.

"It is in the penicillin family, so allergy is relatively common," said Dr. Warren Hammert, a surgeon at the University of Rochester Medical Center in New York.

Rarely, the drug can cause problems with how the liver functions, which will lead to yellowing of the skin called jaundice.

"In rare cases, it can cause a condition where the colon is affected and result in serious long-term GI [gastrointestinal] problems," Hammert told Live Science.

And a few isolated cases of children reacting negatively to the clavulanic acid in Augmentin have also been reported. For instance, 10 children who tested negative for penicillin allergy, broke out into hives after taking Augmentin, according to a 2008 study in the journal Allergologia and Immunopathologia.

Humans gained their first powerful weapon in the war against bacteria in the 1920s. Scottish biologist Alexander Fleming was culturing a bacteria, when he noticed that a mold growing in one of his petri dishes had killed off the surrounding bacteria, according to the Nobel Prize website. After much work, he discovered that the active agent was what is now known as penicillin (named after the fungus, penicillium, which produces it.)

Though penicillin worked wonders, it had some side effects and was not effective against all that many bacteria. So, in the 1950s, scientists at Beecham Research Laboratories, which was created by the same company that produced Lucozade soft drinks and Brylcreem hair gel, began developing new antibiotics. Their strategy was simple and clever: they used the core chemical structure of penicillin, but added different side chains to it, Geddes said.

One of their early successful drugs was amoxicillin, a close relative to penicillin. Both amoxicillin and other penicillins have a key molecular structure that helps the kill bacteria: a chemical ring called a beta-lactam.

Amoxicillin was seen as a breakthrough because it was absorbed better than earlier antibiotics, had fewer of the side effects of antibiotics such as methicillin, and seemed to work against a broad class of bacteria.

However, it had one flaw: at least some resistant populations of bacteria had evolved an ability to fight amoxicillin and other antibiotics by making an enzyme called beta-lactamase, which essentially snipped the beta lactam ring open and disabled it.

But in 1972, Beecham Research Laboratories discovered that a certain bacteria called Streptomyces clavuligerus produced a chemical lookalike to penicillin, called clavulanic acid, as a byproduct of its fermentation, according to an article published in 2007 in the International Journal of Microbial Agents. Like other antibiotics, it had a beta-lactam ring, but on its own, wasn't much good at killing bacteria.

However, when combined with amoxicillin, it created a superb antibiotic. Clavulanic acid was the ultimate decoy: when bacteria sent out its antibiotic-snipping enzyme, Beta-lactamase, it would bind to clavulanic acid instead. Once bound, clavulanic acid changed its shape and permanently deactivated Beta-lactamase. Clavulanic acid worked extremely well against several deadly bacteria, including Escherichia coli, Klebisella aerogens, Pseudomonas aeruginosa and Staphylococcus aureus, according to a 1977 article in the journal of the American Society for Microbiology.

"It was really the first broad-spectrum oral antibiotic which was remarkably free from side effects," Geddes said. "At one stage, Augmentin was the largest selling oral antibacterial drug in the world."