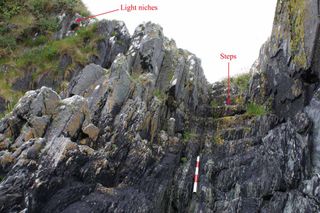 These steps at Dutchman's Cove in Castletownsend, County Cork, Ireland, were carved out of the rock to facilitate illicit trade, in the dead of night, by pirates and smugglers.
(Image: © Photo by Connie Kelleher)

An alliance of pirates preyed on ships laden with treasure, outmatched Britain's Royal Navy, elected their own admiral and, ultimately, were destroyed in a cataclysmic battle against a Dutch fleet in 1614. They were a pirate alliance which operated on the southwest coast of Munster, Ireland, in the early 17th century, and now new archaeological and historical research reveals new details about their adventures.

Among the recent archaeological discoveries that may be connected to the alliance are two remote sites, each with a set of stairs reaching almost to the sea. One of them, located at modern-day "Dutchman's Cove," east of Baltimore, Ireland, held niches where candles or lanterns were used to signal pirates and smugglers who came in the dead of night. Another staircase at modern-day "Gokane Point" (also called "Streek Head"), located on the edge of a headland into Crookhaven Harbor, leads to a subterranean cavern with a waterway by which boats could enter. [See Photos of the 'Pirate Alliance' Sites in Ireland]

"Sites like that would have been used over a very long period by pirates, smugglers and others who wanted to do secret things,"Kelleher told Live Science in an email. Kelleher made Munster's early-17th-century pirates the focus of her doctoral thesis at Trinity College, Dublin, and her results are now detailed in the Journal of Maritime Archaeology. In addition to doing archaeological research, she analyzed historical records.

"One pirate haul is said to have been worth, in today's money, some $7 million," Kelleher said. "This was an amazingly lucrative commercial venture, and this is why it was so successful."

In the early 17th century, many of the pirates in Munster were Englishmen, but there were also Irish, Flemish and "renegade" Dutchmen. The records list one of the pirates as being black. "A pirate named Arthur Drake, who was lieutenant to pirate Capt. Robert Stephenson, is one of the only known black men to have held a position of command in a pirate crew," said Kelleher.

Searching for a lost pirate fleet

Kelleher plans to search Crookhaven Harbor for the pirate-alliance fleet destroyed by the Dutch in 1614. While some of the cargo and sails from these ships were salvaged after the battle — Kelleher found a list of loot from one ship — there could still be more for archaeologists to find. [Arrgh! Photos Reveal 'Pirates of the Caribbean']

"Certainly part of the lower hulls and its cargoes could be there — things that were in the hold of the ships," Kelleher said. "Similarly, if a ship exploded, then material could be scattered, and we could be dealing with a wider archaeological site."

It would be difficult for the researchers to determine if any ships they find belonged to the pirates, Kelleher said, though any intact cargo onboard could be matched up with historical records. "It would be amazing to find such a ship, she said. "Apart from the contribution it would make to our knowledge of ships from that period, it would be the first definitive pirate-associated wreck found in Irish waters discovered to date and one associated with such a tragic event."

Birth of the pirate alliance

Although pirates existed in Munster before the 17th century, a series of events led to the formation of an alliance in the area dominated by English pirates. In 1603, a new king — James I of England (VI of Scotland) — assumed the throne, uniting England and Scotland. He made peace with the Spanish, outlawed the practice of privateering (in which private sailors would be given consent by Britain to attack enemy ships) and cracked down on pirates in southern England.

As a result, the former privateers became pirates and moved their families to Munster, which, at the time, was the site of a British colonization program. With some distance between themselves and the king, the pirates thrived — their booty was smuggled ashore (often with the implicit consent of local officials), fueling the local economy.

In return for the locals allowing the booty to be brought ashore, the pirates bought local goods at three times the normal price. It was a lucrative scheme that attracted not just pirates, but also businessmen, and helped pay for colonial projects in the New World. During this time, individuals invested in colonization projects in the Americas, such as Jamestown and Bermuda. [Gallery: Lost in the Bermuda Triangle]

"Legitimate businessmen and merchant venturers were deeply involved, as it was assured access to venture capital, that was, in turn, invested in colonial ventures elsewhere in the New World, which was opening up to the maritime empires globally at this point in time," Kelleher said in the email.

The pirates also collaborated to deal with common problems. For instance, in 1609, the pirateselected an "admiral" named Richard Bishop, Kelleher said. "Bishop could perhaps correctly be called the pirates' broker, as he successfully bridged the gap between official and unofficial operations, middleman to the middlemen," Kelleher wrote in the journal article.

The pirates also decided to limit their attacks to ships coming from countries that they judged to be traditional enemies of Britain, such as Spain.

The strength of the pirate alliance grew quickly, outmatching anything the Royal Navy could send against them.

In 1609, a senior government official in Ireland, Sir Arthur Chichester, wrote to Lord Salisbury, saying the pirates "are grown to a height of strength and pride that [efforts to combat them] will hardly prevail without the assistance of some of His Majesty's good ships." King James, who had reduced the size of the Royal Navy to save money, did not have the ships in Ireland to take on the pirate alliance, Kelleher said.

In addition to their home bases in Ireland, the pirates sailed seasonally to North Africa and Newfoundland (in modern-day Canada) making contacts with the people there that allowed them to resupply their ships. This extended their range and allowed them to send their fleets away from Ireland when the weather became inhospitable.

Defeat of the pirate alliance

While King James was unable to take on the pirate alliance, the Dutch were. The pirates had been preying on Dutch ships, and by 1612, the Dutch government was making plans to attack them, suggests a detailed "anti-pirate" chart showing Munster's pirate bases dating to that time. [10 Epic Battles That Changed History]

In 1614, after getting consent from King James to capture the pirates and turn them over to local authorities, the Dutch attacked Crookhaven. Dutch Capt. Moy Lambert destroyed a pirate fleet under Capt. Patrick Myagh, Kelleher wrote in her journal article.

A scroll written by English trader Edward Davenant and analyzed by Kelleher gives a play-by-play of the attack. "In an attempt to escape, Capt. Myagh, his two sons and fellow crew members jumped overboard but were caught and murdered by Lambert's crew; his third son survived but was seriously wounded. Others also attempted to make it ashore and were assisted by locals," Kelleher wrote.

Lambert proceeded to loot Myagh's ship, the scroll noted. "What he did manage to take included 3 whole pieces of satin, 3 whole pieces of silk grograine, about 1 whole piece of velvet, 120 whole pieces of Holland cloth, 24 whole pieces of canvas, 1 chest containing about 300 turbans, 2 great chests of sugar, 1 chest of sweetmeats, silver and gold, coined and uncoined, to the value of £3,000," Kelleher wrote. "The goods taken were given an overall value of some £5,000.” Some of these goods were obtained through plunder by Myagh's men, but some, such as the turbans, may have been from trade the pirates conducted in North Africa, she said.

The defeat of the pirates exposed the vulnerability of their base at Crookhaven. Additionally, the same year, a port used by the pirates at Mamora, in North Africa, was lost to the Spanish, and new legislation was passed that allowed for pirates to be tried and executed in Ireland. (Before that, the pirates had to be sent to England for trial.)

"Piracy continued, however — but in a changed format from 1615 onwards, when we see the Algerian Turks and Barbary Corsairs taking over," Kelleher said in the email.

Shipwrecks that are more than 100 years old are protected under Ireland's National Heritage Law, and people who wish to dive down to see them must get a license from the Department of Arts, Heritage and the Gaeltacht, Kelleher noted.