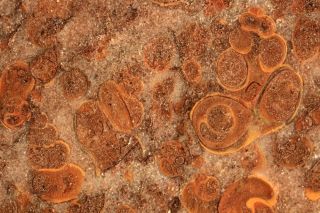 Earth's largest mass extinction had surprisingly little effect on the range of lifestyles seen on the planet's seafloor, despite the loss of more than 90 percent of marine species, researchers find.

Understanding the impacts of this ancient extinction event may shed light on the damage climate change might now inflict on the planet, the scientists say.

The end-Permian mass extinction, which occurred 252 million years ago, was the biggest die-off in the planet's history, and the largest of the five mass extinctions seen in the fossil record. The cataclysm killed as much as 95 percent of all species on Earth. [Wipe Out: History's Most Mysterious Extinctions]

Mass extinctions are often followed by an explosion in diversity, as survivors evolve to fill the niches or roles that dead groups of life once held in their communities. For instance, after the end-Permian die-off, the predecessors of modern burrowing clams, grazing and carnivorous snails, and predatory crustaceans emerged.

However, the overall impact of the end-Permian die-off on marine ecosystems was uncertain. To find out more, scientists analyzed fossils of all known groups of seafloor invertebrates from the periods before and after the mass extinction — the Permian and Triassic periods, respectively.

The researchers deduced the probable lifestyle of each group, based on where it lived, how it fed and whether it was attached to the seafloor. They identified 29 lifestyles, or modes of life.

The scientists discovered that on the global scale, just a single mode of life on the seafloor was irrevocably lost at the end of the Permian: a life spent stationary, unattached to and partly buried in the seafloor, and feeding on any pieces of food that would land on the ocean's bottom. This lifestyle was practiced by now-extinct mollusks known as rostroconchs.

On the other hand, just one new mode of life emerged after the mass extinction: one spent erect on the seafloor with limited mobility and grazing on items suspended in the water. This lifestyle was practiced by the feathery-limbed mobile "sea lilies," or crinoids.

"We are not saying nothing happened," said study lead author William Foster, a paleontologist at Plymouth University in England. "Rather, global oceans in the extinction's aftermath were a bit like a ship manned by a skeleton crew — all stations were operational, but manned by relatively few species."

The lack of change in the number of lifestyles could explain why so few new groups of marine organisms arose after the extinction, said paleoecologist Martin Aberhan, of the Leibniz Institute for Research on Evolution and Biodiversity in Berlin, who did not take part in the research.

"At the level of presence or absence of modes of life, there was virtually no change in the long run," Aberhan told Live Science.

Warming then and now

The researchers noted that the end-Permian mass extinction happened during an episode of global warming, as is happening today. Some scientists have warned that human-related impacts could cause a sixth major mass-extinction event.

"Present-day oceans are under threat from climate change, pollution and overfishing, and a key scientific problem is to predict how future marine ecosystems may function in the face of such pressures," Foster said. "Understanding how marine ecosystems have responded to past climate change and global mass-extinction events may provide some clues."

The scientists noted that tropical marine ecosystems suffered more during the mass extinction than ones at higher latitudes.

"A greater ecological impact in the tropics may be due to the extreme temperatures thought to have occurred at that time," Foster said. "Higher latitudes did also experience a large increase in ocean temperatures, but overall, water temperatures would have been cooler than compared with the tropics."

The scientists also found that reefs collapsed before the mass extinction.

"The precipitous collapse of reefs prior to the extinction is exciting because, before this study, there was not even a suggestion that this would have been the case, and this collapse would have occurred before climate warming in the late Permian," Foster said. "Sea-level fall may have caused the collapse, as it would have reduced the amount of seafloor available for a reef to occupy."

Foster and his colleague Richard Twitchett detailed their findings online Feb. 23 in the journal Nature Geoscience.