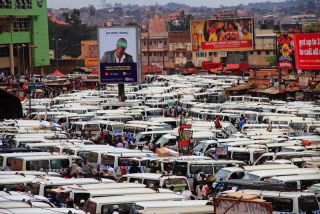 It's a complicated question, but a new study suggests that so far, humanity isn't doing so well at meeting both goals at the same time. A regional analysis of 106 countries around the world finds that, with the partial exception of Africa, most areas emit more and more carbon to improve their citizens' well-being as those nations become more developed.

The findings are the latest volley in a debate going back at least to the 1970s over whether development and fossil fuel consumption have to go hand-in-hand. One idea holds that as nations become more developed, they can improve their citizens' well-being more efficiently, without adding to their rates of carbon emissions, which contribute to global warming. The new study suggests that this optimistic viewpoint isn't playing out.

"Across all these regions, the effect of economic development on the carbon intensity of well-being isn't going down anywhere," said study researcher Andrew Jorgenson, a sociologist at the University of Utah. [8 Ways Global Warming Is Already Changing the World]

The development versus sustainability trade-off

Jorgenson's research focuses on the question of whether economic development must conflict with the environment, or whether development can instead protect the environment. The scientist analyzed data from between 1970 and 2009. First, he measured the carbon intensity of well-being for each country — basically, a ratio of how much carbon a nation has to emit to improve its people's lot in life. In this case, Jorgenson used life expectancy at birth as a way to estimate well-being. Populations with longer life expectancies generally have a better standard of living.

Next, Jorgenson tracked the ratio over time, comparing it to each country's gross domestic product, a measure of economic development. He wanted to know if countries would become more or less efficient at improving well-being as they developed. He also split the countries into continental regions to better understand the trends at a local level.

"What is going on, on the ground in different parts of the world, is unique to those places," Jorgenson told Live Science.

The results showed different patterns in different regions. In Asia and South and Central America, development led to an increase in the carbon expended to boost well-being, Jorgenson found. What's more, the carbon curve is getting steeper over time. The more developed these nations become, the more carbon they emit for each incremental improvement in their people's well-being.

In North America, Europe and the Oceania (Australia, New Zealand and the Pacific islands) region, development is also linked to higher carbon emissions per unit of well-being, though this relationship is steady compared to Asia, and Central and South America.

The only place where development doesn't increase the carbon emitted to improve human lifespans is Africa — so far, at least. Beginning in the 1970s, development in Africa was first linked to a drop in the carbon intensity of well-being. Most likely, the first burst of development in these countries was not in carbon-intensive industry, Jorgenson said.

But around 1995, the story changed. As these nations continued developing, they began to emit more and more carbon for every extra year their populations could expect to live. The trend suggests that in the near future, Africa will look more like the rest of the world, and will have to trade environmental sustainability for economic development.

"Ideally, we want enhanced human well-being, we want reduced environmental impacts, and we want human development to continue. But this shows that pretty much across all these macro regions, the trade-off challenge is getting harder," Jorgenson said. He published the findings today (Feb. 23) in the journal Nature Climate Change. [What 11 Billion People Mean for the Planet]

The research is a sophisticated analysis, said Tom Dietz, a sociologist and environmental scientist at Michigan State University who has collaborated with Jorgenson in the past but did not work with him on the current research. The findings mesh with previous work by Dietz and others, Dietz told Live Science.

"Increasing economic growth does not reduce the [carbon] intensity of well-being," Dietz said. "In fact, the general tendency is for economic growth to increase intensity and move us away from sustainability."

The hope that increased development could lead to decreasing emissions was, perhaps, always slim. Conservationists talk about "rebound effects," which tend to offset the benefits of new technology. For example, Jorgenson said, at the time of the Industrial Revolution, technological advances increased the efficiency of burning coal. But instead of consuming less coal, or even the same amount of coal, at these new levels of efficiency, humanity started burning more and more of the resource.

In modern times, both the United States and China have become more carbon efficient, meaning that the ratio of emissions per unit of GDP has dropped, but this alone has not slowed carbon emissions, Jorgenson said. (Yearly fluctuations in the economy and in energy needs do drive short-term emissions trends.)

"We need to start seriously thinking differently about solutions to these sustainability challenges and recognizing that hoping for technology and engineering solutions … is probably not the way to go," Jorgenson said. "The reality is, we just need to reduce carbon emissions."