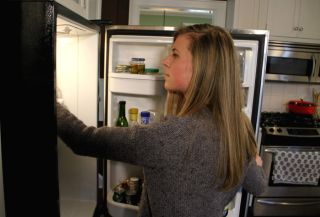 Regan had no idea that two stress fractures in her legs were caused, in part, because of her eating habits. Regan is a track and cross country runner who did not consume enough calories and suffered from female athlete triad syndrome. Doctors at Nationwide Children's Hospital say it is a condition that affects a young woman's energy level, her menstrual cycle and causes weakened bones.
(Image: © Nationwide Children's Hospital)

Female athlete triad syndrome has three interrelated components, all based on inefficient energy availability. When these girls don't eat enough, they don't have enough energy to supply their body for functions unrelated to their sport., they experience menstrual dysfunction, and their bone mineral density is altered.

It is common to see some patterns when looking at the types of athletes who are diagnosed with this syndrome. They tend to participate in what are called lean-build sports, as opposed to non-lean build sports. Lean-build sports are those where girls have an athletic advantage by being thinner or lighter — sports such as running, rowing or cross country skiing. Physicians like myself have also seen a high prevalence of athletes with the triad who participate in aesthetic sports. These are sports where athletes are often judged on their specific performance or wear revealing attire. Those sports include gymnastics, diving, ballet, volleyball and others.

One of the first symptoms of the syndrome is a girl's menstrual cycles will become dysfunctional. We know that there are higher rates of menstrual dysfunction in athletes than in non-athletes. This means they'll start skipping periods, and they will often go longer between periods. Ultimately, in some cases they may lose their periods altogether. In that initial stretch, it is not uncommon to see infertility issues. While high-school athletes are probably not trying to conceive, some older athletes are trying to conceive and start families, and infertility is a concern.

Once the syndrome progresses, we start seeing the decreases in bone mineral density. This normally occurs after a girl misses six periods in a row. A decrease is a cause for concern because in adolescence girls should be gaining bone mineral density that will last the rest of their lives.

When I see a girl showing signs of menstrual dysfunction, I ask them questions to try to determine if the screening was accurate. We know girls aren't regular until they've had their periods for about two years. If they've had their periods for less than two years, their issues might not be connected to menstrual dysfunction. Certainly all girls should be tracking their periods. It used to be old fashioned: you'd have to mark the red 'x' on the calendar, which is kind of embarrassing for girls. But now, there are apps you can get on your phone, and you can track your periods privately, which is very nice. If girls are going longer than 35 days between their menstrual cycles, that's a red flag.

As far as treating athletes with this condition, there are a few things physicians look at, such as their height, weight, activity load and also their injury. If we find evidence of elements of the triad, then typically we request that the patient complete a consultation with a dietician. We know that most of our patients are not purposefully restricting their calories, rather most of them are inadvertently just not getting enough calories or are trying to eat too healthfully, and don't understand the rigors of their sport. Certainly, if in the course of the interview we find girls who seem to have an eating disorder, we refer them to our adolescent medicine clinic for further evaluation.

Other things we may check are vitamin D levels and bone mineral density levels, so that we can see where the girls are along the continuum and we know how aggressive to be with them.

Many girls will often ask how quickly they can return to their sport. If the athlete has normal periods, normal bone mineral density, and a healthy eating attitude, there are no restrictions on participating in sport. On the far end, if the athlete is not getting any periods, has very disordered eating attitudes, and a bone mineral density less than two standard deviations below the mean, then we would recommend that the athlete is absolutely held from activity. Not all girls will fall into these two categories, so there is an in-between. We call this modified participation, and personalize it for each athlete. For example, this might mean that there will be participation with a contract. I might advise the athlete, "Yes, it looks like you're improving on these things, even though you're not out of the woods yet. Let's permit exercise for your health and sporting goals, but in the contract, you must see me every month, we must get this blood work, we must keep track of your periods."

I think it's important to educate more adults and young women on this topic. As we do more and more research into elements of the triad, we see that it's much more prevalent than we ever thought it was. But we also know that we can help these girls optimize their health, prevent and treat injury, and promote their athletic goals.