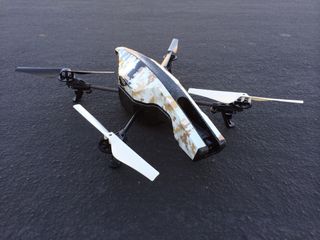 The AR.Drone 2.0 Elite Edition quadricopter comes with a sleek hull (one of two) that is meant for outdoor flying. The hull is 14 inches (35 centimeters) long, and the drone's total diameter is 22 in. (55 cm), including the rotors, in this configuration. The front-facing camera is visible at the front of the hull.
(Image: © Robert Roy Britt)

Hobbyists launched the era of personal drones decades ago with radio-controlled model airplanes. More recently, drones have become synonymous with covert military operations and sneaky law-enforcement activity. But now the era of drones has come home, and the flying machines are better than ever.

There are several interesting drones available to consumers now. Some are little more than indoor toys. Among the most popular and capable drone for outdoor use is the Parrot AR.Drone 2.0 quadricopter, an incredibly stable and capable flying machine that takes HD video and which you control with your Android or iOS smartphone.

I was excited to unbox the AR.Drone 2.0 Elite Edition ($300) I'd bought as a gift for my 12-year-old son (and, honestly, for myself), because I’d read that it was easy to fly. I've never had good luck with remote-control flying machines (most were broken or shelved by the end of Day 1). I wasn't disappointed. The AR.Drone has some limitations and frustrating aspects, but this quadricopter is an absolute blast to fly, and even an old guy like me, who’s not a gamer and is totally inept with joysticks, found it simple to operate.

Setting up the AR.Drone's physical parts takes just a minute or two. It comes assembled except for its two hulls, one of which includes protective foam guard rings that surround each of four rotors. The guard is meant for indoor use. Use it initially. Even if your first flight is outside. Trust me.

Unfortunately before you can fly the thing you'll have to charge the battery, which takes between 2 and 2.5 hours. While the battery is charging, I suggest watching the tutorial videos. They will teach you all the basics you need for your first flight. If I'd watched the videos, I wouldn't have crashed the thing into the sliding door before we ever got it out of the house, and the three flights it took us to figure out the controls would have been reduced to one.

You'll also need to download the app to your iPhone, iPad, iPod or Android device. The user manual calls the app AR.FreeFlight 2, but in the Apple App Store it's just called FreeFlight. The app's Piloting feature — which is the main thing you'll use — isn't accessible until you've paired it with the drone's onboard Wi-Fi, after the battery is charged and just before you make your first flight. [Photos from Above: 8 Cool Camera-Carrying Drones]

The battery slips easily into the drone, and the hull snaps on (rather loosely, actually, but it works just fine). Wi-Fi pairing can take a couple tries, especially if your smartphone is paired with your home Wi-Fi; you might want to go into your smartphone settings and look for the drone's Wi-Fi.

I strongly recommend that your first flight be outside, in an open area, on a windless day. You can do it inside, but be careful. See "Fragility" below.

Easy to fly, if you read the directions

Because my son and I failed to read the directions or watch the training video, our first few flights were frustrating. The drone took off just fine, hovered on its own, but we couldn't maneuver it. After watching the video, the fun began. One useful tip: In preferences, put the app in Joystick mode. That allows you to operate the controls by sliding your thumbs up/down and left/right. If you're not in Joystick mode, you control the drone by actually tilting your phone, and this approach felt less intuitive for a beginner.

It was easy to get the AR.Drone 30 feet or more into the sky (you can adjust maximum height in the app). It was easy to fly it forward. It was easy to turn it. What was harder was flying while turning and going up or down all at the same time. And sometimes, for no apparent reason, the drone struggled with basic forward flying, but we're pretty sure that's just inexperience on our part.

One of this drone's best features, and one to look for if you purchase a drone from another company, is its self-stabilizing state. Stop all attempts to control it, and it'll stabilize and hover. Amazing, really. And if it gets low on battery and you don't bring it back, it'll land itself. (Note: If you're getting low on battery, good idea to fly over open areas only, and bring it back before the battery runs out.)

Once you've mastered the basics, go ahead and remove the safety guard. The drone is then much more maneuverable, and not so affected by a light breeze.

Another excellent feature of this AR.Drone 2.0 is its onboard 720p video camera, which faces forward, and a lower-res camera that faces downward. The app receives and stores video while the quadricopter is in flight. The video quality is surprisingly good, and it's a load of fun seeing the world from a fresh perspective. You can upload videos directly from the app to YouTube. [9 Totally Cool Uses for Drones]

There are many other advanced features. In preferences in the app, you can enable flipping, so that a double tap will cause the drone to do a well controlled flip in midair. And you can alter the maximum allowable speed and height (you will likely want to raise the height limit within moments of your first flight — it's very cool to take the thing a hundred feet into the sky and get a bird's-eye view of your surroundings). You can see all sorts of tricks demonstrated on the company's YouTube channel.

Battery life: One serious frustration is the lousy battery life. The company claims eight minutes, and we got about that much in each of several flights. The battery charges back up in about two hours. That puts a serious damper on taking the drone out to use at some distant location. You can buy a second battery to double your time in the field, or even go for the company's HD battery ($60), said to have 50 percent more power.

Range: The onboard Wi-Fi extends only about half the length of a football field, and conditions can cause the range to vary, the company says. When the drone is out of range, it will self-stabilize, and you simply move closer and regain control. But it is a frustratingly short range.

Fragility: You'll be tempted to fly the AR.Drone indoors initially, thinking that the controlled environment will reduce the chances of breaking the thing. That would be a mistake. Just when I thought I'd figured out the control system, I crashed it into our sliding glass door and it fell to the floor. The protective foam guard rings broke in four places. But the box includes double-stick tape to make repairs with. Make sure you check out this how-to video before you attempt repairs. If you do it right, it's easy and the drone flies just fine subsequently. Outdoors with the guard rings off, we got the drone stuck in a tree once and another time it hit a tree and fell about 7 feet to the ground. Neither crash caused any damage.

Wind: With the guard rings on, forget flying this thing in the wind. We tried in a modest breeze, and upon takeoff, instead of stabilizing, it was blown backward 10 feet into a bush. With the guard rings off, though, it flies well in a light breeze. You'll need to work harder to steer clear of trees and other obstacles, though, as a breeze will change the flight dynamics: When flying into the breeze, the drone will tend to lose altitude quickly, for example, unless your flying skills are developed better than ours were. The company recommends not trying to fly it in winds over 9 mph (15 km/h).

All that said, if you got this far and are thinking seriously about buying a drone that's more than an indoor toy, and you're a relative novice so far as drone piloting goes, the AR.Drone 2.0 is a solid choice. Digitaltrends calls it the "quintessential 'starter' drone." But the price ($300) led the website Droneflyers.com to suggest you might want to start with a cheaper drone: "Better to crash the $40 model or leave it up in a tree," the advice goes.