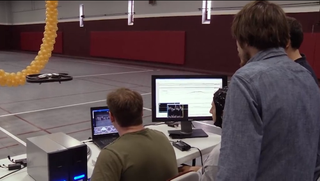 It may seem like science fiction, but researchers are experimenting with a mind-controlled device that enables users to fly a model helicopter with only their thoughts.

Researchers at the University of Minnesota in Minneapolis created a brain-computer interface — a system that allows the brain to communicate directly with an external device — that lets participants control the path of a flying object, known as a quadcopter, simply by thinking about specific movements. The futuristic technology could one day help people with disabilities lead more independent lives, the scientists said.

The specially designed interface is non-invasive, which means it does not require any implanted devices. Instead, users don an electro-encephalography (EEG) cap with 64 attached electrodes that pick up signals from the brain. When participants think about a specific movement — up, down, right or left, for instance — neurons in the brain's motor cortex produce tiny electric signals that are then sent to a computer, explained Bin He, a biomedical engineer and the project's lead scientist. [5 Crazy Technologies That Are Revolutionizing Biotech]

"The signal coming from his brain is being picked up by these sensors and then decoded and sent through a Wi-Fi system to control [the] flying quadcopter," He said in a video produced by the National Science Foundation. "The computer is going to read that digital signal and do all the processing and extract out the brain signal and control [the] quadcopter."

He and his colleagues are testing the system on students, who first undergo 10 to 20 hours of training by using their thoughts to virtually fly an aircraft over a computer-generated model of the university's campus. This helps the students develop "mind tricks" to distinguish between different movements. For example, the brain may process movements differently when a person is preparing to throw a baseball with the right hand, as opposed to the left hand.

Next, the participants controlled the quadcopter with their minds and tried to fly it through a real obstacle course made of balloons.

Eventually, He says the technology could be used to help people with disabilities perform basic, everyday tasks, such as making a phone call, turning on a television, or surfing the Internet.