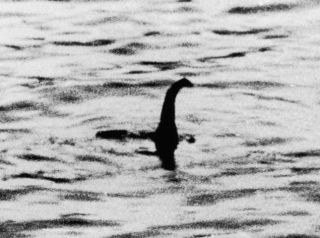 A veteran custodian of Loch Ness monster sightings is concerned that Nessie has not been seen in well over a year, and may be gone, according to a news report. This is the first time in nearly 90 years that such a lengthy lag in sightings has occurred.

Gary Campbell, who lives in Inverness in the United Kingdom has been keeping records of Loch Ness monster sightings for the past 17 years and has put together a list of sightings that goes back some 1,500 years, according to the BBC News.

"It's very upsetting news and we don't know where she's gone," BBC News quoted Campbell as saying. "The number of sightings has been reducing since the turn of the century but this is the first time in almost 90 years that Nessie wasn't seen at all." (Apparently three reports of possible Nessie sightings in 2013 were discredited after closer scrutiny, The Inverness Courier reported.)

This is not the first time Nessie has been a no show; in fact, there are no reports of the beast until less than a century ago. The Loch Ness monster first achieved notoriety in 1933 after a story was published in a local newspaper describing not a monstrous head or hump but instead a splashing in the water that appeared to be caused "by two ducks fighting." A famous photograph showing a mysterious head and neck brought Nessie international fame, but was revealed to be hoax decades later. [Rumor or Reality: The 10 Creatures of Cryptozoology]

Some claim that the Loch Ness monster was first reported in A.D. 565, when St. Columba turned away a giant beast threatening a man in the Ness River, which flows into the lake. However it is only one of many Catholic Church legends about righteous saints vanquishing Satan in the form of serpents and dragons.

There are many myths lurking in the cold Scottish highlands, including legends of "water horses" — creatures associated with rivers and lakes that resemble normal horses, but are actually both magical and deadly: Should anyone try to mount a water horse, it will accept the rider, then gallop to a nearby lake or river, drown its rider, then eat his flesh, one myth goes. Though some of these legends and stories may have inspired some of the claims about the Loch Ness monster, Nessie is, of course, not a magical horse, but instead believed to be a very real, living and breathing aquatic creature resembling a long-necked dinosaur.

Skeptics would suggest there is likely no monster in the lake at all. But this news about the lack of sightings poses a big problem for those who believe in the creature's existence. The fact that no Nessie report has been registered in 18 months means that, even if it existed, it is likely no longer there.

Though people often speak of Nessie as a solitary (often female) animal, if it exists there must be more than one in the lake — at least dozens if not hundreds. This changes the equation and deepens the mystery, because with so many of them allegedly living in the lake they should be seen much more often. It defies logic to believe a group of unknown monsters lives in the lake — which has many local residents and tens of thousands of monster-seeking tourists all around it — and not a single one surfaces to be seen. Think of it this way: If over a year went by without a single sighing of a giraffe, rhino or horse, the most logical — and the most tragic — explanation would be that they had all died out. Extinction is the only reason that large animals simply vanish like that.

This is especially true for the Nessie creatures, which are, after all, confined to a lake that is only a little over 20 miles long and about a mile wide (32 by 1.6 kilometers) for much of its length. Unlike birds (which can migrate hundreds or thousands of miles) or terrestrial animals (which may roam for a few hundred miles), the Nessie creatures are presumably locked in the lake. There are no underground waterway exits to the ocean or anywhere else. In short, there is nowhere else to go if they are not being seen in the lake.

But fear not, monster lovers and Inverness Tourism Board: If history is any indication, eventually there will be more sightings of Nessie, whether they exist or not. There are enough things in the lake that can be mistaken for a monster, including large fish, strange waves, and even the occasional hoax, to keep the sightings going and the tourist dollars coming.

Benjamin Radford is deputy editor of "Skeptical Inquirer" science magazine and author of six books including "Lake Monster Mysteries: Investigating the World's Most Elusive Creatures." His Web site is www.BenjaminRadford.com.