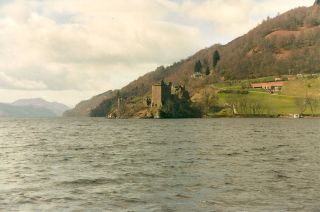 This is not the photo taken of the supposed Loch Ness monster, but we included the image because it shows Urquhart Castle and the woody shore of Loch Ness near where the photo was taken.
(Image: © Benjamin Radford)

George Edwards, a Scottish skipper who spent decades searching for the beast said to inhabit Loch Ness, claims to have finally spotted his elusive quarry and gotten what he calls photographic proof of the monster.

On Nov. 2, 2011, Edwards photographed what appears to be a single hump in the water from the deck of his boat, "Nessie Hunter." Edwards said that "It was slowly moving up the loch towards Urquhart Castle and it was a dark grey color. It was quite a fair way from the boat, probably about half a mile away but it's difficult to tell in water," according to the Daily Mail, which has posted Edwards photo. He watched the object for five to ten minutes before it slowly sank and did not resurface.

Edwards said he waited to release the photograph until after unnamed experts had examined it. Oddly, he is quoted in the Daily Mail as having had the photograph "independently verified by a team of US military monster experts." In fact, the United States military does not have a team of "monster experts" that it dispatches to investigate huge, unknown creatures around the world. Nor, for that matter, is it clear what "verifying" his photo would mean other than suggesting it was likely a real (i.e., not digitally faked) image of something in the water — though what that "something" might be is, of course, the relevant question. The shape could theoretically be anything from a fish to a floating log to a lake monster.

Edwards' description of his sighting raises more questions than it answers. For example, if he had the object in sight for five to 10 minutes, why is there (apparently) only one photograph of it? That's enough time to capture dozens or hundreds of photographs. And though the unknown object seems large, there's no way to determine its size since we don't know the exact distance to the object (though he's quoted as saying it was a half-mile away), and there's nothing of scale nearby to help judge. Depending on how close it is to the camera, it could be 5 feet long or 50 feet long.

A watery clue to the mystery?

There are many unknowns, but if Edwards' account is accurate, it may provide an important clue as to the "monster's" identity. Other mysterious objects floating in lakes have been known to behave exactly as Edwards described — for example, the most famous sighting of "Champ," the monster said to live in Vermont's Lake Champlain. A woman named Sandra Mansi sighted and photographed "Champ," resulting in what was called the "best photo" of the monster, and indeed of any lake monster anywhere. [Our 10 Favorite Monsters]

That dark, humped "creature" was later revealed to almost certainly be a submerged tree trunk brought to the surface by buoyant gases created during decomposition. It rose to the surface, floated for about five to 10 minutes (during which time it looked exactly like a monstrous hump), then sank back down into the cold water never to be seen again. It is a well-established phenomenon that can — and has — created false lake monster sightings and photographs.

Ever seen Bigfoot's eyeshine in your headlights at night? Heard a splash and sworn you saw Nessie's tail disappearing below the lake surface? Cryptic creatures of myth and legend are known the world over.

The floating log hypothesis also explains why these images are unusually good: Unlike an animal or wave that appears for mere seconds and creates blurry images, a log remains stationary for minutes, allowing for sharper, clearer photographs. Then they sink back down to the lake floor never to be seen again, having created a monstrous, mysterious "best ever" photograph.

The solution to one famous "best ever" lake monster sighting and photo does not necessarily solve another "best ever" sighting and photo, though Lake Champlain and Loch Ness have many similar characteristics (including wooded shorelines). The similarities are striking, and there's good reason to suspect the same natural hydrologic phenomenon was responsible for both monster photographs.

There is of course a strong economic incentive to promote monsters like Nessie: tourism. Loch Ness is the main tourist draw in the Scottish highlands, and Edwards makes his living guiding visitors who come from all over the world hoping for a glimpse of the famous monster. No one has suggested that Edwards faked the photo, but it's fair to point out that if an ambiguous shape is seen in the waters of Ness, the monster interpretation is far more likely to be accepted than a mundane explanation. If it's a fish or floating log, it's a non-story; if it's a possible "best evidence" of Nessie, it's international news.

The Loch Ness monster first jumped into international notoriety in the 1930s after a photo was widely published showing a serpentine head and neck. That image, taken by a London surgeon named Kenneth Wilson, was touted as the best evidence for Nessie — until it was admitted to be a hoax decades later. [Countdown: The World's Greatest Hoaxes]

Loch Ness itself has been repeatedly searched for over 70 years, using everything from miniature submarines to divers and cameras strapped on dolphins. In 2003 a team of researchers sponsored by the British Broadcasting Corporation (BBC) undertook the largest and most comprehensive search of Loch Ness ever conducted. They scoured the lake using 600 separate sonar beams and satellite navigation. No large unknown creatures were found.

If, as seems likely, Edwards photographed a floating log, there will be no way to prove it one way or the other nine months later. Edwards' photograph may or may not be of the Loch Ness monster, but one thing is certain: It is not the first "best ever" photographic evidence, and it won't be the last.