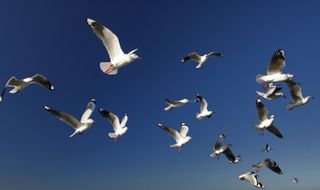 A flock of birds inspired Carl Jung's theory that everything in the universe is intimately connected.
(Image: © Mike Tan | Shutterstock)

Amazing coincidences happen all the time — but are they simply the product of random chance, or do they convey some hidden meaning? The answer may depend on whether you believe in synchronicity.

The term synchronicity was coined by Swiss psychiatrist Carl Jung (1875-1961). Jung had a strong belief in a wide variety of paranormal phenomenon, including psychic powers, astrology, alchemy, predictive dreams, UFOs and telekinesis (moving objects with the mind). He was also obsessed with numerology — the belief that certain numbers have special cosmic significance, and can predict important life events.

Jung's concept of synchronicity is complicated and poorly defined, but can be boiled down to describing "meaningful coincidences." The concept of synchronicity came to Jung during a period of mental illness in the early 1900s. Jung became convinced that everything in the universe is intimately connected, and that suggested to him that there must exist a collective unconscious of humankind. This implied to him that events happening all over the world at the same time must be connected in some unknown way.

In his book "137: Jung, Pauli, and the Pursuit of a Scientific Obsession," Arthur I. Miller gives an example of synchronicity; one of his patients "told Jung that when her mother and grandmother died, on each occasion a flock of birds gathered outside the window of the room." The woman's husband, who had symptoms of heart problems, went out to see a doctor and "on his way back the man collapsed in the street. Shortly after he had set off to see the specialist a large flock of birds had alighted on the house. His wife immediately recognized this as a sign of her husband's impending death."

There is, of course, a more prosaic explanation for curious coincidence: birds are very common, and simply by random chance a flock will appear near people who are soon to die — just as they appear daily around millions of people who are not soon to die.

The appearance of synchronicity is the result of a well-known psychological phenomenon called confirmation bias (sometimes described as remembering the hits and forgetting the misses); we much more easily notice and remember things that confirm our beliefs than those that do not. The human brain is very good at making connections and seeing designs in ambiguous stimuli and random patterns.

If Jung's patient came to believe that a flock of birds meant that death was imminent, she would start noticing flocks of birds, and remember the times when they coincided with a loved one's death. But she would not likely notice or remember the countless times when flocks of birds appeared over people who lived for years or decades longer. Put another way, a person dying when a flock of birds is present is an event; a person not dying when a flock of birds is present is a non-event, and therefore not something anyone pays attention to. This is the result of normal human perceptual and memory biases, not some mysterious cosmic synchronicity.

It's easy to see why synchronicity has mass appeal; it provides meaning and order in an otherwise random universe. One famous (and more modern) example of synchronicity is the "pennies from heaven" phenomenon described by advice columnist Dear Abby. Thousands of readers have written Abby over the years telling personal stories of thinking about dead loved ones while they happen to find a penny — often with the finder's (or the dead loved one's) birth, marriage, or death year — and taking that as a comforting sign that their departed loved ones are thinking of them.

Yet countless people find pennies all the time; some of them will have recently thought of a dead relative, and a smaller subset of that group will find a penny with a significant date on it. Statistically it would be unusual if this did not occur regularly — but of course most people prefer to think of the event as a touching sentiment instead of a cold, random coincidence.

Robert Todd Carroll, in his book "The Skeptics Dictionary," notes that "even if there were a synchronicity between the mind and the world such that certain coincidences resonate with transcendental truth, there would still be the problem of figuring out those truths. What guide could one possibly use to determine the correctness of an interpretation?" There is no scientific or objective way to determine whether synchronicity is valid or not; it's all subjective personal opinion and experience and flexible definitions.

Taking the example of Jung's avian banshee, if you truly believe that the presence of birds is a portent of death, there are many questions that need to be examined: How many birds are needed? One? Dozens? Hundreds? Is it any type of bird? How soon before a person's death do they appear? Minutes, hours or days? Does it differ from person to person? And even if the proposed synchronicity was true, how do we know whose death the birds' presence foretells? Perhaps there was a dying person elsewhere in the building whose death the birds had come to mourn, and it was not Jung's patient's husband at all.

Or, let's say, for example, that you were thinking about taking a vacation to a destination two states away. You could drive there, or fly, or possibly take a train ... but as you ponder it, a fly buzzes into the room and lands on your head. Jung would claim that synchronicity indicates that you should fly there; the universe has given you a clear sign by connecting your thoughts with the outside world and its future. Except that it hasn't, not really; the cosmic connection is all in your mind. To see why, imagine that it happened to a Spanish speaker; in that case, the synchronous co-incidence of thinking of a mode of transportation while a fly lands on you evaporates, since the Spanish word for the insect fly (mosca), is not the same as the word for an aerial method of transportation (volar). Surely any transcendental, universal truths don't depend on what language you speak.

Though Jung had no background in science (his interests lay in mysticism and psychology) he — like many modern New Age writers, including Deepak Chopra — invoked quantum physics in support of his ideas. Jung's ideas about synchronicity were given a veneer of scientific respectability through his friendship with physicist Wolfgang Pauli, who helped promote them.

Synchronicity is an interesting philosophical idea; unfortunately there is no evidence that it actually exists. It is not surprising that synchronicity — like many ideas of Jung and his colleague Sigmund Freud — have not been proven. Even the famous Myers-Briggs Type Indicator personality test, which was based in part on Jung's work, has been widely challenged as invalid and unscientific. A century ago when Jung came up with the idea of synchronicity, it seemed to be an exciting, cutting-edge theory. Unfortunately for Jung, it is one of many fruitless quasi-scientific ideas in history that has not stood the test of time.

Benjamin Radford, M.Ed., is deputy editor of Skeptical Inquirer science magazine and author of six books including Scientific Paranormal Investigation: How to Solve Unexplained Mysteries. His website is www.BenjaminRadford.com.