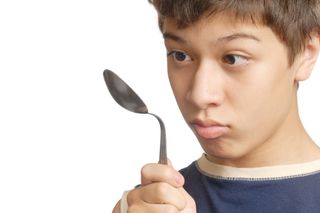 "Who here is psychic? Raise my hand!"

That's an old joke, but there are several claimed types of psychic powers, including precognition (knowing the future) and telepathy (describing things at a remote location). But for sheer impressiveness it's hard to beat psychokinesis, the ability to move objects through mind power. The word is derived from the Greek words for "mind" and "motion" and is also called PK or telekinesis.

Fictional psychokinetics are easy to find: The popular X-Men comic and film franchise includes the character Jean Grey, whose powers include extrasensory perception and psychokinesis. The 2009 movie "Push" is about a group of young Americans with various psychic abilities who team up and use their paranormal powers against a shadowy U.S. government agency.

Though many Americans believe in psychic ability (about 15 percent of us, according to a 2005 Baylor Religion Survey), scientific evidence for its existence remains elusive. Some people even link psychokinesis to the spiritual world, suggesting for example that some reports of ghosts — such as poltergeists — are not manifestations of the undead at all, but instead the unconscious releases of a person's psychic anger or angst.

If people could move everyday objects with nothing more than their thoughts, this should be quite easy to demonstrate: Who wouldn't like their latte delivered by a psychic barista from across the counter, floating it right to your hand with a mere gesture?

This doesn't happen, of course. Instead researchers have focused on what they term "micro-PK," or the manipulation of very small objects. The idea is that if the ability exists, its force is obviously very weak. Therefore, the less physical energy that would have to be exerted on an object to physically move it, the more obvious the effect should be. For this reason, laboratory experiments often focus on rather mundane feats such as trying to make dice land on a certain number at an above-chance rate, or influencing a computerized random number generator.

Because of this change in methodologies, psychokinesis experiments rely more heavily on complex statistical analyses; the issue was not whether a person could bend a spoon or knock a glass over with their minds, for example, but whether they could make a coin come up heads significantly above 50 percent of the time over the course of 1,000 trials.

The idea of people being able to move objects through mind power alone has intrigued people for centuries, though only in the late 1800s was it seen as an ability that might be scientifically demonstrated. This occurred during the heyday of the early religion Spiritualism, when psychic mediums claimed to contact the dead during séances, and objects would suddenly and mysteriously move, float, or fly by themselves across the darkened room, seemingly untouched by human hands. Though many people were convinced — including, ironically, Sir Arthur Conan Doyle, the creator of Sherlock Holmes — it was all a hoax. Fraudulent psychics resorted to trickery, using everything from hidden wires to black-clad accomplices to make objects appear to move untouched.

As the public slowly grew wise to the faked psychokinesis, the phenomenon faded from view. It was revived again in the 1930s and 1940s, when a researcher at Duke University named J.B. Rhine became interested in the idea that people could affect the outcome of random events using their minds. Rhine began with tests of dice rolls, asking subjects to influence the outcome through the power of their minds. Though his results were mixed and the effects were small, they were enough to convince him that there was something mysterious going on. Unfortunately for Rhine, other researchers failed to duplicate his findings, and many errors were found in his methods.

In the 1970s, Uri Geller became the world's best-known psychic and made millions traveling the world demonstrating his claimed psychokinetic abilities, including starting broken watches and bending spoons. Though he denied using magic tricks, many skeptical researchers observed that all of Geller's amazing feats could be — and have been — duplicated by magicians.

Public interest in psychokinesis returned in the 1980s. One person nationally known for claimed psychokinetic ability, James Hydrick, tried to demonstrate his powers on the television show "That's My Line" in 1981, following several successful television appearances. He claimed to move small objects, such as a pencil or the pages of a telephone book, with his mind. Host Bob Barker consulted with skeptic James Randi, who suspected that Hydrick was merely discreetly blowing on the pages to make them move.

To prevent this method of trickery Randi placed styrofoam bits around the open book, as the lightweight pieces would clearly be disturbed if the pages were moving because of Hydrick's breath instead of his mind. After many awkward minutes in front of Barker, Randi, a panel of judges, and the live studio audience, a flustered Hydrick finally said that his powers weren't cooperating. Hydrick later admitted that his psychokinetic powers had been faked, and marveled at how easy it had been to fool the public.

The history of psychokinesisis a history of frauds and fakery, both proven and suspected.

Even many researchers admit that the data fall far short of scientific standards of proof; researcher Russell Targ, in his book "The Reality of ESP" (2012, Quest Books) acknowledges that "the evidence for laboratory psychokinesis is quite weak."

Recent advances in virtual reality technology may, however, be the next best thing. In 2017, a company called Neurable announced plans to develop psychokinesis — or at least a virtual reality form of it — for a game called Awakening. Using a combination of eye movement tracking technology and electroencephalogram (EEG) sensors in a headset, the game allows a player to move and manipulate objects in a virtual world merely by looking and thinking. After an initial calibration process that takes several minutes, the players can select and move computer-generated images.

Perhaps one day technology will allow us to actually move objects with our thoughts, but until then we must be satisfied with the power depicted in fiction and fantasy.