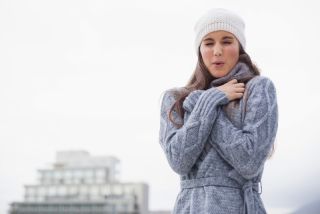 Shivering triggers a response in muscles similar to that of exercise, new research suggests.

The study, published today (Feb. 4) in the journal Cell Metabolism, found that the muscles of shivering people triggers the release of a hormone that activates brown fat, a type of fat that burns energy to generate heat.

If this same response could be activated by a drug, then scientists could one day develop medicines that could amp up energy expenditure, without requiring people to break a sweat — or a shiver, said study co-author Dr. Francesco Celi, an endocrinologist at Virginia Commonwealth University.

Several studies have shown that people respond to the cold by increasing their energy expenditure, said Celi, who conducted the new research while at the National Institutes of Health. A hormone called irisin seemed critical in the process, but exactly how it was linked to energy expenditure wasn't clear.

To find out, Celi asked seven healthy study participants to ride a bike as hard as they could, and measured their maximum oxygen uptake, or VO2 max. This allowed the researchers to calculate the participants' maximum energy expenditure. The volunteers also spent an hour exercising at 40 percent of their maximal capacity.

After each bout of exercise, the researchers took blood samples and measured levels of several chemicals, including irisin.

It turned out that muscle contractions stimulated the release of irisin. [9 Myths That Can Make You Fat]

Most of the participants started shivering. An hour later, the researchers drew volunteers' blood and measured their circulating hormone levels.

"With shivering, we obtained a similar increase in irisin level as maximum exercise, or one hour of exercise, but the timing was much shorter and the amount of energy expenditure was lower than these two types of exercise," Celi told Live Science.

The team suspected that brown fat, which often is found in hibernating animals but also to some extent in humans, played a role. To find out, they exposed ordinary, white fat cells to irisin in a lab dish. After a while, the irisin stimulated the release of chemicals usually made by brown fat to produce heat.

The findings suggest that both shivering and muscle contraction stimulate the release of this hormone. Irisin then turns on brown fat, and allows it to burn energy to produce heat.

However, it's probably too soon to swap out a jog for sitting in a chilly room, as no studies have shown that shivering on its own can lead to weight loss. (Even exercise, without calorie restriction, doesn't do much to help people shed pounds, Celi said.)