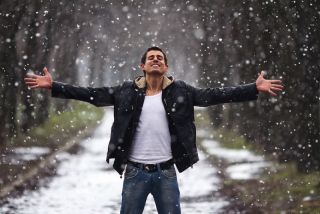 "Temperature training" may be what is missing from your weight-loss plan. New evidence suggests that regular exposure to mildly cold air may help people lose weight by increasing the amount of energy their bodies have to expend to keep their core temperature up, researchers say.

In other words, warm, cozy offices and homes may not be ideal places for those who want to lose weight. In fact, being able to control the ambient temperature might be partly responsible for the rise in obesity rates in industrial societies, said researchers from the Netherlands in a study published today (Jan. 22) in the journal Trends in Endocrinology & Metabolism.

"Since most of us are exposed to indoor conditions 90 percent of the time, it is worth exploring health aspects of ambient temperatures," said study researcher Wouter van Marken Lichtenbelt of Maastricht University Medical Center. "What would it mean if we let our bodies work again to control body temperature?"

The human body withstands the cold by shivering, which produces heat; this provides one explanation for why cold temperatures may promote weight loss. Studies have shown that people expend five times more energy when shivering, compared to when they are resting. [11 Surprising Things That Can Make Us Gain Weight]

The body uses more energy when the mercury drops for other reasons, as well. For example, a type of fat called brown fat, which burns calories rather than storing them, is activated in response to cold. In young and middle-aged people, heat production through brown fat can account for up to 30 percent of the body's energy budget, the researchers said.

A previous study from researchers in Japan found a decrease in people's body fat after they spent two hours per day for six weeks in a room with a temperature of 62.6 degrees Fahrenheit (17 degrees Celsius).

The new study also found that people get used to the cold over time. After spending six hours a day at 59 degrees Fahrenheit (15 degrees Celsius) for 10 days, people in the study not only had more brown fat, the participants also said they felt more comfortable and shivered less when exposed to lower temperatures.

Although a 59-degree room would likely be too cold for most people, it's possible that room temperatures in the mid-60s would also activate brown fat, the researchers said.

The long-term effects of regular exposure to cold are still unclear and require further investigation, but evidence suggests training the body to tolerate cooler air may indeed help burn calories, the researchers said.

"Similarly to exercise training, we advocate temperature training," the researchers said. "More-frequent cold exposure alone will not save the world, but is a serious factor to consider in creating a sustainable environment together with a healthy lifestyle."