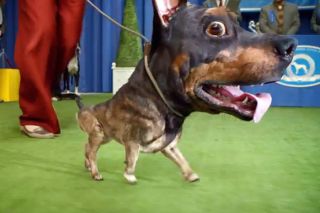 For the treatment of animals, there are so many indicators of cultural, corporate and political change for the good. One is the creative, and often provocative, advertising on display not only during the Super Bowl, but in advance — where companies and ad agencies push out their creative content in traditional and social media and get a national discussion going about their brands.

Each year, it used to infuriate me to see baby or juvenile chimps dressed up and featured in commercials, because I knew what those chimpanzees would endure throughout their lives — and I also knew that the trainers would discard those chimps once they got big and leave it to the animal welfare community to pay for their care for the expected duration of their lives, sometimes as long as another half century. It costs the animal welfare movement about a million dollars per chimp, based on expected lifespan.

Happily now, instead of dressed-up chimps, we are getting much more advertising that promotes heart-warming pet adoption and the virtue, care and goodness associated with the human-animal bond. This year's Budweiser ad, featuring a puppy and a Clydesdale, extols the bonds between animals and people and even between animals and animals — and the joys we get from animals. They're further celebrating that bond by asking users to join in on their #bestbuds hashtag, posting photos of themselves with their pets to their social media channels. We've also heard reports that Budweiser has a not yet leaked ad featuring puppies from Southern Paws Rescue, an animal rescue in Illinois that will be aired in the 4th quarter. And the Audi ad takes a tongue-in-cheek look at the idea of not experimenting with something that may go wrong — like a fictional "Doberhuahua" fad breed — and instead making the right choice to adopt a one-of-a-kind, unique pet from an animal shelter.

There is change afoot on other fronts as well. Thursday we announced that pharmaceutical giant Merck & Co. recently decided that it will no longer conduct or financially support biomedical research on chimpanzees for the foreseeable future and will favor alternative methods. In recent years, several other pharmaceutical and biotech companies, including GlaxoSmithKline, AstraZeneca and Novo Nordisk, have adopted similar policies prohibiting or severely restricting chimpanzee use.

While many of these companies did so at the request of The HSUS (either through shareholder resolution efforts or direct talks with company representatives), many others have chosen to adopt policies on their own after a 2011 Institute of Medicine report found nearly all chimpanzee use for research to be unnecessary. Private companies seem to be following the lead of the federal government by moving away from chimpanzee research. We hope that the remaining private companies using chimps will get on board, so that the use of chimps in invasive experiments stops in both publicly and privately funded institutions.

Pacelle's most recent Op-Ed was "Advocates for Humane Treatment Welcome Scrutiny, If It's Honest." This article was adapted from "Ending 'Commercial' Exploitation," which first appeared on the HSUS blog A Humane Nation. The views expressed are those of the author and do not necessarily reflect the views of the publisher. This version of the article was originally published on Live Science.