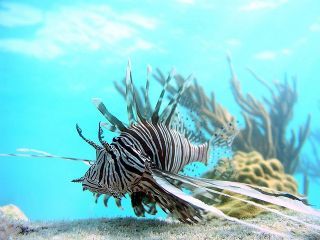 The rapidly reproducing and notoriously hungry lionfish has pushed native creatures out of tropical reefs at an alarming rate in the western Atlantic, where the invasive species has no natural predators.

Even though it may be impossible to get rid of lionfish altogether in the Atlantic, measures to control their populations — even spearing them one at a time — seem to help native species recover, a new study in the Bahamas suggests.

The findings come as good news after years of discouraging discoveries about lionfish, which are native to tropical regions of the Pacific Ocean and were likely introduced to Atlantic waters in the 1990s. One study last year showed that not even sharks could help stem the spread of the species. Another investigation found that lionfish are thriving in even deeper waters off Florida than feared. In some spots in the Atlantic, it was estimated that lionfish, which are covered in venomous spines, had wiped out 95 percent of native fish.

Desperate to fight off the species, authorities in Florida and the Bahamas have organized fishing derbies. U.S. environmental officials even launched an "Eat Lionfish" campaign to stoke a market for this fish. But the rapid spread of lionfish has made eradication virtually impossible, the researchers of the new study said. [Alien Invaders: Photos of Destructive Invasive Species]

However, the prognosis for native species may not be so grim as long as lionfish are kept in check. The new investigation found that "by creating safe havens, small pockets of reef where lionfish numbers are kept low, we can help native species recover," Stephanie Green, a marine ecologist at Oregon State University who led the study, said in a statement. "And we don't have to catch every lionfish to do it."

Green and colleagues used ecological models to determine what percentage of lionfish would need to be caught at a certain location to help boost populations of native fish like Nassau grouper and yellowtail snapper. They tested out these models at 24 coral reefs near Eleuthera Island in the Bahamas, removing specific numbers of lionfish from each area.

The researchers say their results, which were published in the journal Ecological Applications, could help conservationists and marine wildlife managers choose which sites to target for lionfish removal. For example, it might be important to keep lionfish numbers low in areas that are hot spots for young fish, such as mangroves and shallow reefs.