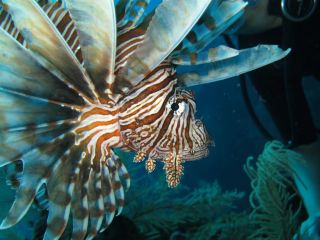 The invasive lionfish is native to the Indo-Pacific region, though has been eating its way through reefs of the Caribbean Sea and Atlantic Ocean, scientists are finding. With no effective predators, fishing by humans may be the only way to control the population, say scientists.
(Image: © Abel Valdivia)

The eye-catching red lionfish is eating its way through Caribbean reefs, and nothing, not even a toothy shark, seems able to stop the voracious fish, a new study finds.

"Lionfish are here to stay, and it appears that the only way to control them is by fishing them," said researcher John Bruno, professor of biology at the University of North Carolina at Chapel Hill.

The research, detailed online July 11 in the journal PLOS ONE, focused on the effect of natural predators, such as sharks and groupers, on the population of two species of red lionfish (Pterois volitans and Pterois miles) on 71 reefs of the Caribbean over three years. [See Photos of Lionfish & Other Freaky Fish]

The thought was that these predators could keep the invasive lionfish species in check by out-competing them for food or by directly eating the fish, which are covered in venomous spikes.

Result? The red lionfish, which sport striking rust-colored lines on their bodies and a fan of soft, waving fins, seem to pay no attention to such predators. "Our results suggest that interactions with native predators do not influence the colonization or post-establishment population density of invasive lionfish on Caribbean reefs," Bruno and his colleagues write.

Lionfish, native to the tropical regions of the Pacific Ocean, have made big splashes in the news recently, as they invade "foreign" seas, including parts of the Atlantic Ocean and the Caribbean. Humans first introduced them to the Atlantic — their good looks make them popular aquarium fish. In their new homes, they have no real predators, a fact strengthened by the new study.

"When I began diving 10 years ago, lionfish were a rare and mysterious species seen deep within coral crevices in the Pacific Ocean," said study lead author Serena Hackerott, a master's student in marine sciences at UNC. "They can now been seen across the Caribbean, hovering above the reefs throughout the day and gathering in groups of up to ten or more on a single coral head."

To keep the lionfish from decimating reef fish, in Florida and the Bahamas, authorities have even organized fishing derbies.

In the new study, the researchers found lionfish numbers were lower in reefs where managers removed the lionfish daily. And while the researchers support restoration of large-reef predators to keep the invasive lionfish in check, they aren't optimistic about the outcome.

"Active and direct management, perhaps in the form of sustained culling, appears to be essential to curbing local lionfish abundance and efforts to promote such activities should be encouraged," they wrote in the PLOS ONE paper.